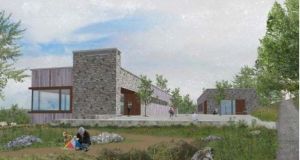 Opponents of the Hell Fire Club development are concerned the natural habitat will be turned into a ‘concrete jungle’.

Controversial plans for a €15 million visitor centre at the Hell Fire Club in the Dublin mountains have been submitted by South Dublin County Council to An Bord Pleanála.

The council and forestry agency Coillte want to create a tourist attraction on a site surrounding the ruins of the 18th-century hunting lodge on Montpelier Hill as a “gateway” to the Dublin mountains.

Opponents of the scheme said they were concerned the natural habitat would be turned into a “concrete jungle”.

The development would include a visitor facilities building with an audio-visual and exhibition space, a glass-fronted cafe looking out over Dublin Bay, and a kiosk, shop, toilets and changing rooms.

There would also be a treetop canopy footbridge linking Montpelier Hill and Massy’s Wood forests over the R115 Old Military Road.

As part of the Dublin Mountains Project the council plans to undertake conservation work to the Hell Fire Club, a protected structure and national monument structure built around 1725, as well as repairs and protection measures to two ancient passage tombs discovered last year at the site.

The work may need to include measures to restrict access to the Hell Fire Club at times to prevent further damage to the building, for example by fire or graffiti, the council said.

The development of a mixed forest to replace 26 hectares of commercial conifer plantations, and improved walkways and trails, is also planned.

The Save the Hellfire campaign group said the scheme had the potential to cause flooding and environmental damage and increase traffic congestion in an area where the current road infrastructure is below standard.

It has also raised concern about the impact on the native wildlife including the greater spotted woodpecker and the red squirrel.