Decision on international co-operation on carbon trading postponed after impasse 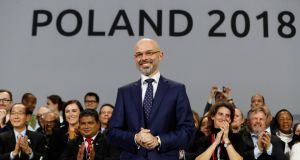 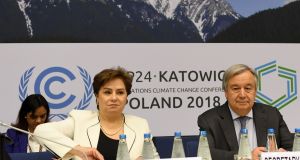 Officials from around the world have agreed upon a set of rules to govern the 2015 Paris climate accord after two weeks of UN talks in Poland.

Michal Kurtyka, a Polish official chairing the talks in Katowice, sealed the deal on Saturday after diplomats and ministers from almost 200 countries approved.

“It is not easy to find agreement on a deal so specific and technical. Through this package you have made a thousand little steps forward together. You can feel proud,” Mr Kurtyka told delegates. After he struck the gavel to signal agreement had been reached, ministers joined him on the stage, hugging and laughing in signs of relief after the marathon talks.

The UN talks were meant to provide firm guidelines for countries on how to transparently report their greenhouse gas emissions and their efforts to reduce them.

Scientists say emissions of gases such as carbon dioxide need to drop sharply by 2030 to prevent potentially catastrophic global warming.

The meeting postponed decisions on pledging more ambitious action to fight global warming and on regulating the market for international carbon emissions trading.

Significant progress has been made in agreeing to pursue a new climate finance goal for supporting developing countries and states that are most vulnerable to climate change.

The schedule for the closing plenary session, was repeatedly pushed back to later in the day. Many ministers worked through the night in an attempt to iron out differences.

Most difficulties centred around Article 6 of the Paris Agreement under which signatory states co-operate with one another when implementing their national determined contributions, known as NDCs, which are specific mitigation commitments.

Co-operation mechanisms enshrined in the article form the legal framework to allow use of market-based climate change mitigation mechanisms to operate, such as dealing in carbon credits.

Complex rules about carbon markets, however, have been kicked into 2019 for finalisation as ministers struggle to resolve issues around loopholes.

Under the article, countries are expected to agree to rules to ensure they do not double count emissions reductions. This is when one country is allowed to pay another to lower emissions but count those lower emissions towards their own emissions cut targets.

A way to avoid this is to create an accounting rule which would ensure emissions reductions generated in one place cannot be counted both by the party generating the cuts and the country using those reductions toward its own target under the agreement. – Additional reporting: AP