Storm Deirdre: Power restored to most homes after more than 4,000 suffer cuts

Christmas shoppers were battered by Storm Deirdre as 130kmh winds, rain and sleet hit the nation over the weekend. Thousands of homes and businesses were left without electricity as the storm moved across Ireland causing flooding in some parts. 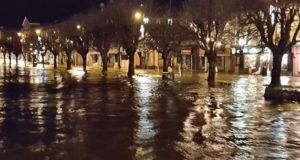 The ESB has restored power to nearly all of the thousands of homes and businesses affected by Storm Deirdre.

More than 4,000 customers were without power on Saturday, with the worst affected areas in counties Cork, Limerick, Kerry, Clare, Wicklow, Meath and Dublin.

A status-orange weather warning was in place until Saturday night with flooding reported in the southeast of the country.

There were still power outages across parts of the country on Sunday night with homes affected in Salthill in Galway, Killorglin in Co Kerry, Ballyhaunis in Co Mayo, Bundoran in Co Donegal, Abbeyfeale in Co Limerick and Coolock in Dublin.

In Cork city, a nine-year-old girl was taken to hospital after being injured by a falling branch on Saturday evening. Her injuries are not believed to be life-threatening.

In Co Wexford, council staff worked overnight on Saturday to alleviate the effects of Storm Deirdre and high water levels in Enniscorthy. Flooding damage was described as “minimal” on Sunday morning.

Water levels in the Slaney flowing through Enniscorthy peaked at about midnight on Saturday night/Sunday, but Wexford County Council had already closed the two quays to traffic and distributed some 1,500 sandbanks to local businesses and householders.

Templeshannon Quay, on the side of the river closer to the road to Wexford town, was closed at about 9pm, and the other side was closed about two hours later.

Diversions were put in place to allow motorists into the town and remained in place on Sunday morning, with the centre of Enniscorthy open for business to allow Christmas shopping continue. By Sunday afternoon Enniscorthy was fully accessible with diversions lifted.

About 30 council staff worked overnight, in two shifts, to mitigate the effects of the high water, while the owners of local commercial premises and houses put their own flood defence systems in place and used sandbags in doorways.

“At this point I would say there has been a very small amount of damage done to commercial premises,” the spokesman added.

“We know there’s poor weather coming again on Monday evening and Tuesday, and there’s a lot of water in the system; everything that falls in Wicklow or Carlow ends up in Wexford, so we’re certainly not out of the woods yet, and we’re going to keep a watchful eye on it.”

Graiguenamanagh in south Kilkenny was among the worst areas hit by flooding, as the river Barrow and the Duiske recorded high water levels, and other parts of the county that regularly get hit, such as Thomastown and Kilmacow, were also affected.

Main Street in Graiguenamanagh was closed on Saturday evening after the Duiske river burst its banks.

In Waterford, diversions were put in place after flooding hit many sections of road, including the “back road” between Carrick-on-Suir and Kilmeaden, while parts of Portlaw also flooded because of high water levels in the Clodiagh river.

A number of attractions at the Winterval festival in Waterford city had to temporarily close on Saturday evening because of high winds and heavy rain, including the Winterval Illuminates light show, the ferris wheels, carousel and ice-skating rink.

A yellow marine warning is in place on Sunday with west to southwest winds reaching force six or higher at times on the coast, Met Éireann has said.
ESB Networks said the majority of customers who lost power during the storm had it restored on Saturday night.

“While we were on alert in advance of the storm and some damage was caused, yesterday was a relatively routine busy winter’s day for ESB Networks across the country,” a spokesman said.

Met Éireann said conditions will continue to be unsettled with another spell of very wet and windy weather on Monday and Tuesday.

There will be outbreaks of rain and drizzle in the west and south of the country on Monday morning. Rain will turn heavy and persistent in Connacht, west Munster and west Ulster later in the day, with a risk of spot flooding.

Highest temperatures will be between nine and 12 degrees, with strong and gusty southerly winds.

Widespread heavy rain on Tuesday morning will gradually give way to clearer, brighter and more showery conditions through the early afternoon.

There will be strong to gale force and gusty southerly winds over the eastern half of the country which will gradually ease through the morning.

Highest temperatures will be between seven and nine degrees, with patchy frost possible overnight.