What are these eggs I found on the shingle? Readers’ nature queries 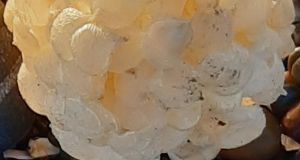 I found these sunlit eggs on the shingle at High Rock between Malahide and Portmarnock, a wonderful contrast between them and the dark pebbles. – Maris Heffernan, Malahide, Co Dublin
It’s the egg mass of the common whelk.

I came across this unusual squirrel in St Enda’s Park. He was half grey and half red, and was very friendly. – Jane Grayson, Firhouse, Dublin 24
It’s a grey squirrel in its winter coat.

I found these close to the shoreline near Dog’s Bay in Roundstone. They were very fragile and came apart in the hands. – Andrew O’Connor, Letterfrack, Co Galway
They are potato urchins, also called sea potatoes, and are covered with spines when alive.

This barn owl was a recent visitor to our garden. – Rod Tuach, Ashford, Co Wicklow

I saw this on Donabate beach. I walk the beach regularly and have never seen it previously. – Marie Arnold, Donabate, Co Dublin
It’s a barrel jellyfish, common around the coast, but usually not washed in quite so early in the year.

We found this little dead guy on our worktop at the end of last month. It was buzzing at the window earlier. It looks like a bee and we wondered why it was about this time of year. – Sean Doyle, Cabinteely, Dublin 18
Although I can’t see its legs it looks like the female hairy-footed flower bee, Anthophora plumipes, which can be seen from February. It gets into the house because it nests sometimes in the concrete of chimneys and falls down into the house. The male looks quite different, more like a bumble bee.

What kind of spider is this? – Mark McCloskey, Drogheda, Co Meath
The giant house spider, Tegenaria gigantea, a common and harmless arachnid.