Severe frost expected to set in on Sunday night, with icy stretches and freezing fog

Glackmore Mountain in Donegal was covered in a blanket of snow as temperatures plunged to minus four degrees Celsius. Video: Bren Whelan / Donegal Climbing (www.donegalclimbing.ie) 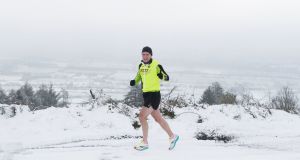 Joggers in Rossmore, Co Carlow after large parts of the country were covered in snow. Photograph: Niall Carson/PA Wire

Snow and ice has descended on many parts of Ireland on Sunday with some roads impassable and frost on the way.

Met Éireann has issued a status yellow snow and ice warning for the entire country, which is in place until 7pm Sunday.

The forecaster says there will be scattered falls of sleet, snow and hail continuing for the rest of the day, along with icy and hazardous conditions.

There is also a status yellow low temperature warning in place for the whole country until 10am on Monday, with temperatures of minus 5 degrees expected in some places.

AA Roadwatch is reporting very icy conditions in most parts of the country, with snow on roads in some areas.

Have you been out in the snow? Share your pictures with us

In Co Kerry, the Conor Pass is impassable due to snowfall, as is the Ballaghisheen Pass near Cahersiveen. Particularly icy conditions have also been reported on the N21 between Castleisland and the turn-off for Knocknagashel and the N71 at Moll’s Gap.

In Co Wicklow, gardaí advise avoiding the Sally Gap, Wicklow Gap, and all upland areas due to icy conditions.

In Co Galway, extreme caution is advised around Clifden and on the N59 between there and Maam Cross after snowfall on Saturday night.

There is also heavy snow on roads in Waterford city, Tramore and surrounding areas of the county, as well as some routes in nearby south Kilkenny.

In Co Wexford, particularly icy conditions have been reported on the N25 between Wexford Town and New Ross.

A widespread sharp to severe frost is expected to set in on Sunday night, with icy stretches and freezing fog, especially across the northeast and east.

That frost will clear on Monday morning and most areas will be generally dry and sunny, with temperatures rising to to 3 to 7 degrees.

Tuesday will see a transition to milder and more unsettled conditions, with heavy rain in some places next week and higher temperatures of 7 to 11 degrees.