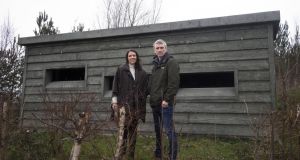 Caroline Cowley and Garrett Phelan outside his Hide Project in north Co Dublin.

A dump, even a decommissioned one, does not seem like an auspicious place to meet an artist to talk about an artwork celebrating nature. But as Garrett Phelan starts to introduce me to his monumental and multidimensional Hide Project, standing beside our cars on a grey afternoon at the old Balleally landfill site, near the north Co Dublin town of Lusk, things quickly get a little magical.

Out of the corner of my eye I see a brown animal loping behind him as he talks. It’s so big I think it must be some kind of small deer, but the movement is all wrong: it’s an odd, zigzag stride. It’s an exceptionally large hare, a creature saturated with the kind of cultural symbolism that Phelan sometimes draws on for his work.

The curious thing is that I’ve spent many, many hours birding on the adjacent Rogerstown estuary over 30 years, and I can’t recall ever seeing a hare in this area, although they are not uncommon. And now this one is taking a good look at us, right out of cover in the middle of a car park.

Balleally dump forms a vast dome of entombed garbage overlooking an estuary vibrant with wildlife. Rogerstown is one of the best places in Ireland to watch winter waterfowl and wading birds. BirdWatch Ireland has created two good hides here over the past 30 years. This enables a very close approach to the waterbirds without disturbing them.

So why has Phelan, a distinguished conceptual artist, decided to create a third hide, and why has Fingal County Council supported him under the Per Cent for Art scheme? Why has he built the hide from concrete instead of wood, and why is a recurrent motif in his project the portrayal of the characteristic birds of the estuary wired to batteries?

Small wonder that the veteran local BirdWatch Ireland member Sean Pierce admits that he and his colleagues were pretty wary when Phelan first approached them for support and advice.

I was a little wary myself as we headed through a path carved through young woodland on the west end of the dump. Some experiences of conceptual art in the past have brought me out in a rash.

But when we turn a corner and Phelan’s hide comes into view it has an immediate and powerful presence. It’s like walking into a hyper-realist painting: it sits very comfortably in the landscape yet somehow looks much more vivid than a conventional hide might do. Its heavy concrete shell, which sounded so inappropriate in the abstract, has been structured and imprinted to look like the wooden shingles that hides are built with, only more so.

We enter the hide into total darkness. Then we open the shutters, and brilliant, glittering light floods off the wet landscape. It becomes clear that this is indeed, in Phelan’s words, “a functional space as well as a monumental and celebratory one, not a lifeless sculpture in the landscape but a place that pulses and lives”.

The window slits offer a generous command of the north side of the estuary, a breathtakingly expansive vision after the narrow woodland path and the hide’s initial shuttered blackness. The panorama includes a direct overview of a single water meadow, which often holds hundreds, even thousands, of wintering birds: godwit, redshank, curlew, egret, plover, brent geese and several species of duck.

BirdWatch Ireland volunteers count these birds regularly. This is an essential part of monitoring population patterns, which in turn indicate the ecological health of the whole estuary. I’ve often tried to count this field from a BirdWatch Ireland hide to the east, but the uneven ground, combined with the tidal flows that often breach the meadow banks, can make accuracy very aspirational. I’ve never succeeded in approaching the meadow on foot without disturbing the birds. From Phelan’s hide it’s relatively easy to find every last little wader.

The artist’s love for this estuary goes back to childhood summers spent here and to his mother’s passion for its birds. He stresses that he is not a mainstream birder: “I wouldn’t be looking for the ultradetail you need to know to find rare waders.” But he knows the common birds of the estuary very well indeed, as witnessed by the meticulous and delightful illustrations for the Hide Suite series of prints that form another part of his project.

Phelan welcomes the prospect of practical, environmentally significant use of the hide. He is well aware that the main obstacle to its use is access, as the hide has to be kept locked to prevent vandalism, and BirdWatch Ireland is already overstretched providing volunteers to warden the other hides at weekends. So he has made an unusual commitment. He is available, by appointment through Fingal’s public-art officer Caroline Cowley, who commissioned the piece, to bring anyone who is interested to the hide. How long does this offer last? “Until I die,” he says, and seems to mean it.

He is happy for anyone who visits the hide to simply look for birds, but Phelan is more than willing to engage in open discussion about why the structure is also an artwork, and any ideas that art – the inside walls and ceiling are etched with provocative illustrations and slogans – may spark. The conversation may range from the ethics of bird-ringing through meditation, the nature of monuments, and environmental art.

“I’d love a whole other audience to come out here, people who have never held binoculars in their lives,” he says. “I want to demystify art without losing its conceptual rigour. This is a publicly-funded project, and I’ve created it in the spirit of the arts bringing people together.”

Cowley, who has backed the project through many negotiations since 2007, is well aware that it may initially puzzle both birders and art lovers. “But our promotion of public art cannot always be based on consensus,” she says. “Sometimes we should also show the way ahead.”

Whatever your take on art or on nature, a visit to the Hide Project online or, much better, on foot is likely to make you think again, probably more than once. It has certainly already helped Pierce to overcome his initial wariness. “It’s in a very good location,” he says. “It can only complement the other hides and enhance the experience of visiting the estuary.”

The range of work is remarkable. Phelan hopes the concrete hide may echo monuments from the Stone Age, long outliving its current functions, and evoking wonder, associated as it will be with so much detritus from the dump, in civilisations millenniums hence.

The prints in the Hide Suite, in contrast, are exquisitely delicate products of the Stoney Road Press, which will exhibit them in May. Their striking association of precisely-rendered bird species with electric batteries is, in part, an ironic comment on the way conservation, with its GPS tagging and satellite tracking, affects the creatures it seeks to protect. But these images also hint at how, as Isabel Nolan’s perceptive accompanying text points out, the consciousness of birds is linked to magnetic fields in ways our science is still unable to fathom.

To visit the hide email caroline.cowley@fingal.ie.