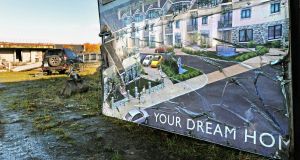 Post-boom ghost estate: Some 45,000 new homes must be built in Ireland’s five cities over the next three years. Photograph: Eric Luke

Tom Parlon of the Construction Industry Federation is never slow to defend builders. In his world, more houses would be built if value added tax and planning levies were cut, while irksome planning regulations hinder efforts to put workers on sites.

Last week, the Department of the Environment and Housing published three reports. Taken together, they explode a few myths that have plagued Irish housing policy for years and that are significantly to blame for Ireland’s housing crisis.

First, developers and economists have long claimed that Irish building costs are out of line with the European average. They are not. In fact, they are very similar to those in most other European countries. Indeed, they stand roughly where they did in 2004.

Meanwhile, the endless clamour for changes to building regulations that benefit builders will not increase the numbers that are built, or reduce prices that those same builders charge to people trying to buy their first home.

For example, it has been argued that high-rise apartment blocks would cut prices. They will not. Instead, they will increase the return enjoyed by those who own the land on which they are built. The value of land is determined by the numbers and types of homes that can be built upon it.

Land that houses 100 apartments is twice as valuable as a plot that can fit 50. If height caps were to be raised, land values would rise. Not only that, but the department’s own analysis shows that building higher is more expensive. Six floors is the optimum maximum height.

The experience of current projects demonstrates that the net effect of reducing VAT and levies would be to increase the value of the building land by a quarter. Such savings will not be passed on, regardless of what promises are made to the contrary.

The situation has been worsened by what has happened since the economic crash and the creation in a time of existential crisis by the Government of the National Asset Management Agency. Faced with calamity, Nama bundled land together and sold often to foreign-owned funds.

The UK’s experience happened over decades. In Ireland we did it quickly because of Nama’s work

The Government undoubtedly had a problem. It had an awful lot of land on its books that was worth little. They had to attract buyers. The easiest thing was to sell it bulk at a cheaper price, backed with tax incentives.

The incentives encouraged land-buyers to hold. A quick “flip” of lands would have attracted a 33 per cent tax, but the funds paid nothing to the exchequer if they held for seven years. That quickly began to be a problem from 2015 onwards.

Today, such companies own enough lands for 17,000 homes. Most of them are in little hurry to release it, believing that values will increase. It is a control issue. The higher the percentage they own, the more they can control the market. They can turn the tap on and off, when they want.

Ireland is not the first to make such a mistake. The United Kingdom did it years ago, where eight major building firms owned the bulk of available building land – this has contributed significantly to the housing problems the UK has today.

However, the UK’s experience happened over decades. In Ireland we did it quickly because of Nama’s work. Significant land banks are now owned by funds, with no intention to build, waiting for capital increases. This was predictable.

Meanwhile, builders have pushed to be able to offer fewer parking places and offer smaller, more crowded apartments. If implemented, it would matter little, saving between 3 per cent and 15 per cent of “hard” construction costs. Little of that is ever likely to be passed on to homebuyers.

Last September, industry voices insisted that builders had no difficulty in hiring staff. Now, we know that they do

The biggest effect of such a change would come in city centres, where basement parking would disappear. In Dublin, apartments in such blocks would still need to sell for €530,000 afterwards, making them unaffordable for most buyers.

Meanwhile, reducing the size of apartments is the least effective way of reducing costs, despite the fact that has been the road travelled most recently by Minister for Housing Eoghan Murphy and before him by Alan Kelly.

Recent newspaper clippings hold unwelcome truths. Last September, industry voices insisted that builders had no difficulty in hiring staff. Now, we know that they do. Every 10,000 houses needs 20,000 builders.

In addition, there is the issue of Ireland’s stock of vacant homes: the 183,000 of them that exist, excluding holiday homes – which is twice the international norm. Of these, 65,000 are in places where there is high demand and they have been empty for five years or more.

Existing vacant homes tend to be well-located, inexpensive to refurbish and capable of being turned around quickly. Based on current costs, up to five vacant apartments can be refurbished for the same cost as building one new suburban three-bedroom home.

Almost two years after the launch of Rebuilding Ireland there has been no meaningful measures to address this problem. Existing vacant properties are a rapid and cost-effective way to alleviate emergency needs.

Meanwhile, the options that could work continue not to get the attention they deserve. Co-operative housing is a widely used model in other European countries – up to one-third of all housing in Germany is co-op housing.

Why is this model not used more here, particularly when it has been demonstrated that co-ops work and can deliver affordable housing in Dublin. O’Cualann Co-Op built and sold new homes in Dublin for less than €180,000 to people not on the housing list.

Co-ops have much lower margins than developers. If the State provides land at a discount, it could lead to savings of one-third. Such homes could be built in Cork city for less than €190,000 and in Shankill in Dublin for less than €240,000. Yet there are no mentions of co-ops in the reports.

However, the Government does intend to use State-owned land for housing. Current research shows that Dublin City Council has vacant zoned land that could house 19,000 dwellings, but it has completed fewer than 100 homes in the last 18 months.

The figures are similar for most other local authorities. Fewer than 700 local authority homes were completed last year across the country. The latest reports have a critical flaw in that they no hard timetables for State-led construction.

Ireland has been living with housing numbers that have hidden the reality, rather than brought light. In its reports, the Housing Agency said 12,666 housing units were recorded in 2015, an increase of 15 per cent on 2014.

“The majority of these homes were private housing units, with 465 social houses. Preliminary figures for 2016 indicate that 14,932 completions were recorded last year, an increase of 18 per cent on the previous year,” it goes on.

The scale of the crisis is evident from the department’s own text: 45,000 new homes must be built in Ireland’s five cities over the next three years

The Department of Housing tells us that 18,000 new ESB connections were made in 2017 and suggests this represents the figure of new homes completed. A number of other more accurate indicators suggest half of this figure were actually built.

Less than 1,100 of them were new apartments. This is a substantial shortfall of what is actually needed to stabilise Ireland’s housing market, while fewer than 5,000 were constructed the year before that.

The real numbers are masked by the fact that 32,000 houses built during the boom, but mothballed afterwards because of debt, legal actions, bankruptcies, or all three together, were slowly brought back on to the market over the last six years.

The scale of the crisis is evident from the department’s own text: 45,000 new homes must be built in Ireland’s five cities over the next three years and a minimum of 550,000 new homes are required across the country by 2040.

Mel Reynolds is an architect and project manager