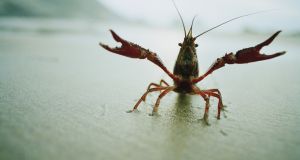 The white-clawed crayfish is a globally threatened species and Ireland holds one of the largest surviving populations. Photograph: Ragnar Schmuck

Water users are being urged to take extensive precautions to stop the spread of a highly infectious Crayfish Plague after confirmation of an outbreak on Lorrha River in north Tipperary.

Dead freshwater crayfish were reported on the river in Lorrha village recently and DNA analysis has confirmed that the cause of death was Crayfish Plague, according to the National Parks and Wildlife Service (NPWS). It is working with Inland Fisheries Ireland, the Marine Institute and Tipperary County Council, trying to contain the spread of the disease and to identify its source.

It infects species of crayfish only – in this case white-clawed crayfish – but causes 100 per cent mortality. There is no indication at this stage of how the disease reached Lorrha River. It does not affect humans.

The white-clawed crayfish is a globally threatened species and Ireland holds one of the largest surviving populations. It is the only freshwater crayfish species found in Ireland, and is present in lakes, rivers and streams over much of the island. Throughout Europe the species has been decimated by the impact of Crayfish Plague. Its spread to Europe coincided with the introduction of North American species of crayfish.

Until 2015, Ireland was considered free of the disease and it remains the only European country without any established non-native crayfish species. This is the fourth confirmed outbreak of crayfish plague since 2015. Previous outbreaks affected the Bruskey/Erne River in Co Cavan; the River Suir (downstream of Clonmel) and the River Deel (downstream of Newcastle West).

“All the agencies involved in managing and protecting the rivers in Ireland have expressed concern that another outbreak has been detected and are reiterating their advice and guidance to all users of the river to implement routine cleaning and drying of their equipment once they leave the river and before using it again,” according to a spokeswoman for the Department of Culture, Heritage and the Gaeltacht, which has responsibility for the NPWS.

“This is important as it is known that the crayfish plague organism can be carried on wet equipment to new sites. Containment of the outbreak is essential to prevent spread to other as yet unaffected populations in Ireland,” she added.

If Crayfish Plague becomes established “there is a high probability that the white-clawed crayfish will be eliminated from much of the island,” she added.

If non-native crayfish are found to be established in Ireland, this could have a severe impact on habitats (eg destabilising canal and river banks by burrowing) and other freshwater species, such as salmon and trout fisheries. “However there is no evidence to date that non-native freshwater crayfish have been introduced to Ireland,” she confirmed.

Anyone using the river is being urged to observe the “check, clean and dry protocol”. All wet gear should be checked for any silt or mud, plant material or animals. It then should be cleaned and finally dried.

Disinfectant or hot water (over 60 degrees) should be used to clean all equipment followed by a 24-hour drying period. Drying is especially important, including removal of water from inside a boat and disposing of it on grass. A drying period of at least 24 hours is needed to ensure that a boat is clear of infectious organism.

People are also asked to alert the authorities of any mass mortality of crayfish or sightings of unusual crayfish that might be a non-native species (eg crayfish with red claws, large size). The species is protected under Irish Law and the EU Habitats Directive. It is illegal to deliberately release any non-native species of crayfish into Irish freshwaters.