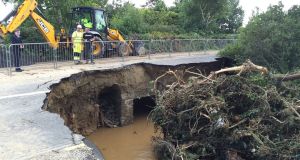 Damage to the main Derry to Moville road in Co Donegal caused by the force of a flooded river overnight, after heavy rain left a trail of destruction. Photograph: Brian Hutton/PA Wire

Work continues to repair the damage caused in Derry by the “unprecedented” storms last week, with 60 per cent of flooded homes now cleared.

More than 570 households have registered flood damage with Derry City and Strabane District Council (DCSDC), which is continuing to process applications for the emergency payment scheme.

More than £270,000 has been paid to homeowners in the council area to allow them to make emergency repairs to flooded properties. The council’s technical staff have now visited 98 per cent of registered properties.

“Priority is being given to continue that work in the coming days to complete inspections and advance payments to those affected,” a council spokeswoman said.

Flooding help centres remain open in the worst-affected areas, in Drumahoe and Eglinton in Derry.

Advice and assistance on insurance claims and entitlements is available at the help centre, as well as services including the collection of bulky waste, free food, tea and coffee, shower facilities, clean clothing and cleaning supplies.

DCSDC’s officers have also visited a number of flood-hit properties in rural areas of Tyrone including Glenelly, Castlederg and Plumbridge.

The Red Cross is assisting in co-ordinating offers of donations and assistance from businesses and distributing them to families in need, and counselling services have been established to help those affected by the flooding.

“As the scale of the incident starts to become apparent to people, the need for emotional support and a listening ear has been acknowledged,” a spokeswoman from DCSDC said.

More than 20 roads remain closed in Derry and Tyrone, mainly in the Claudy and Drumahoe areas of Derry and the Greencastle and Plumbridge areas of Tyrone.

“With water levels reduced, the roads that remain closed are mainly due to collapsed bridges or culverts, landslides, damaged road surfaces or debris washed onto the road,” a Department of Infrastructure spokesperson said.

“Road users are reminded to adhere to road signs and any temporary traffic lights, to avoid roads affected by flooding if possible and to take care driving.”