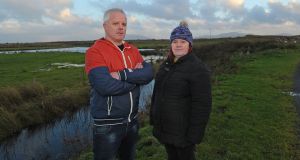 Alan and Eileen Mullarkey, who have been affected by construction on the wind farm project in north Mayo. Photograph: Conor McKeown

When an ESB and Bord na Móna consortium sought approval for a €600 million onshore wind farm in north Mayo, there was a cautiously positive response to a project with far fewer potential risks than the Corrib gas refinery.

But a recent series of protests by a small number of people living close to the site at Bellacorick has highlighted wider concerns about the developers’ approach.

“North Mayo has learned the meaning of community – through the gas – but the handling of this wind-farm project so far shows the State clearly has not,” says Brendan Lavelle of Keenagh Community Development.

The joint venture, Oweninny Power Ltd, is based some 32km west of Ballina in a place best known for its “musical bridge” dating from 1820 and as the site of a former ESB milled-peat power station that was decommissioned in 2003.

At peak Bellacorick employed about 360 people between the two State companies, and tears were shed when its iconic cooling tower was demolished in 2007.

The benefits of the Erris wind resource were recognised by Bord na Móna when it built the State’s first commercial wind farm there in the early 1990s.

The ESB and Bord na Móna originally planned a 112-turbine farm on some 5,000 hectares of land compulsorily acquired by Bord na Móna more than 50 years ago. This was scaled down to 61 turbines of some 176m in overall height – almost twice the height of the former peat station cooling tower – which was approved by An Bord Pleanála in 2016.

The European Investment Bank has given €80 million towards the first phase of 29 turbines, now under construction at a cost of €160 million.

During the An Bord Pleanála oral hearing into the project, the Corick Power Group – comprising residents living in Bellacorick, Crossmolina, Keenagh and Bangor Erris – made it clear they were not opposed to it in principle but wanted to ensure adequate benefit was returned, in the form of a gain to the community.

“Community gain” has been an optional power afforded to planning authorities until it was specifically legislated for after 2006. An Bord Pleanála can attach it as a condition, as it did for the last section of the Corrib gas pipeline.

The Government has recently confirmed approval for Shell’s sale of its 45 per cent stake in Corrib to the Canada Pension Plan Investment Board for more than €1 billion. The Corrib developers had paid €8.5 million over five years into a community gain fund administered by Mayo County Council, after previous efforts by Shell to disburse its own funds in Erris had proved to be very divisive.

However, even the latter fund was controversial, as a local authority audit found the council had allocated €451,000 of the sum to itself.

Five years ago Mayo county councillors voted in a community gain rate of €10,000 per megawatt of wind energy generated for all wind farms in the county. This rate was set as a planning condition in 2016 for ABO Wind, a German company building eight wind turbines on Coillte land at Sheskin forest, 8km north of Bellacorick.

However, Oweninny Power is paying a fraction of that, at €2,500 per megawatt annually. Residents ask how this can be. Mayo County Council says it was caught by An Bord Pleanála’s failure to set any community gain rate as a specific condition for Oweninny.

In negotiations following a judicial review taken by the council, Oweninny Power agreed to a €2,500 per megawatt per-annum payment. The council said that, given the position it found itself in, it was “not practical or possible” to negotiate anything higher and forecasts it may still generate €5 million-€10 million over the lifetime of the farm.

Oweninny Power says it has separately supported several local community projects in north Mayo during construction as a “gesture of goodwill”.

A lack of local employment opportunities and the impact of construction on nearby residents are also bones of contention for some, while Brendan Lavelle in Keenagh, south of Bellacorick, is unhappy with Eirgrid’s failure to pay a community gain contribution when upgrading its 110kV line, although it is paying individual farmers.

Alan and Eileen Mullarkey, of Shanakilla, live along the L52925, a single lane road across the bog, which was not one of the three stated access routes in the original plan for wind-farm construction.

Ms Mullarkey last June phoned Mayo County Council in frustration over use of the road by large haulage trucks working on the project. The local authority said it was “investigating” the matter when a resident phoned on June 6th, and Oweninny Power sought permission to use the road a week later “for exceptional circumstances”.

The road has since subsided in part, a pillar cap has been knocked off a century-old bridge and the Mullarkeys and neighbours have photographs of frequent flooding incidents from the Oweninny river and tributaries. Deer disturbed by the night lights on the wind-farm site are roaming into local farms.

The small number of residents have recently taken to protests, and are very upset that gardaí were called.

Oweninny Power says it has agreed to improve the road, and is consulting with the National Parks and Wildlife Service on the “most appropriate approach to the issue of deer in the area”. It did not comment on whether this would involve a cull.

Mayo County Council says it is aware of frequent flooding and is consulting with the developer.

Fine Gael senator Michelle Mulherin has called on Bord na Móna and the ESB to “talk directly “ to the residents living near the Oweninny wind farm and “accept the principle that those communities living closest to the turbines should receive special benefits”.