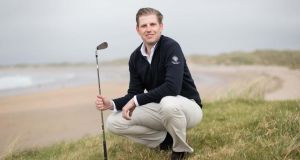 Eric Trump at Doonbeg: “Without a golf course you don’t have a hotel.” Photograph: Eamon Ward

Donald Trump’s Irish golf club, at Doonbeg in Co Clare, has been given the go-ahead to build a sea wall to stop part of its course being eroded by the Atlantic Ocean.

Clare County Council granted approval for the plan despite opposition from An Taisce, Friends of the Irish Environment (FIE), the West Coast Surf Club and others.

However, the plan - which involves building a 38,000 tonne rock barrier to protect three holes at the course “as a matter of urgency” - has the backing of the local community in Doonbeg.

In its decision, the council said the planned development would not be likely to have a significant effect on any European nature conservation site and would not significantly impact on the amenities of the area, in particular the Carrowmore Dunes, the White Strand and Doughmore Bay.

The council made its decision having regard to the nature and scale of the proposed development, the established use and amenity of the existing golf club and hotel and the proximity of the site to designated European nature conservation sites.

General manager of Trump Doonbeg, Joe Russell said: “This decision demonstrates the council’s commitment to support local business and protect the economic future of the region.

“Trump Doonbeg will continue to engage with all stakeholders throughout the construction process. Moving forward, Trump Doonbeg will proceed with its ambitious plans to protect and expand our facilities at Doonbeg so they can be enjoyed by many generations to come.”

Local farmer and longtime supporter of the barrier plan John Flanagan said he was “delighted’ with the decision. “It is great that an agency like Clare County Council recognises what we have been saying - that the dunes are in trouble and that they need protection.”

Mr Flanagan urged objectors not to appeal the decision. “It is our lands and our livelihood. The plan is only trying to protect the hills from being washed away. Let us live here with the consequences of the decision. It is the best shot we have here.”

However, Tony Loves of FIE said the group will be appealing the decision to An Bord Pleanála. He said his group was ‘in shock’ over the ruling.

“We relied on the best international scientific advice which said with absolute certainty that proposed seawalls will destroy the beach in front of them and will increase the rate of erosion on adjacent beaches,” he said.

“Any intervention through physical barriers will impede the natural evolution of the dune system and put at risk protected species, even without considering the loss to Doughmore strand and its great dunes.”

Plans were first lodged for coastal protection works in May of last year and that plan was withdrawn last December in favour of a scaled-down proposal.

The golf club told the council that ‘do nothing’ scenario would bring the entire viability of the resort and its potential closure into question. The club’s consultants stated that “this would result in a permanent and profound negative economic impact upon Doonbeg, its hinterland and the wider context of Co Clare”.

“If a certain part of the property is destroyed, you don’t have a viable hotel and the lights get turned off and I think people realise that.”