‘King of all fish’ remains safe from Irish anglers 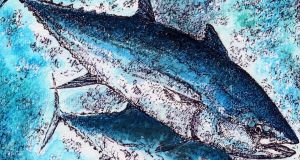 Somewhere out there beyond the islands – or so I may imagine this autumn – swim pods of giant bluefin tuna, the world’s most valuable fish. It is also one of the biggest and most beautiful, its value attained in the thinnest, glowing slices of sashimi, raw slices that, curling over rice, become the sushi of Japanese cuisine.

As a veteran piscivore who prefers to eat at home, I have yet to try either, though an enterprising Galway fishmonger does offer year-round delivery of “super-frozen” sashimi-grade slices from the Wild Atlantic Way.

I don’t know if the late AA Gill was right to declare that “sushi isn’t really food, like picnics aren’t really lunch”. But I’m also somewhat haunted by an Irish observer’s report of operations aboard a Japanese longlining freezer trawler (Irish Fisheries Investigations No 20). The boat was catching bluefin between Ireland and Iceland in 1997, but the report was not published by the Marine Institute until 2008, when Irish anglers were catching bluefin off the north and west coasts and Irish trawlers were netting them as bycatch.

The lead observer aboard the Koshin Maru was marine biologist John Boyd, who wrote graphically of the capture and demise of bluefin hauled up from the squid-baited hooks.

Freshly hooked fish sometimes proved so strong, sprinting in wide arcs close to the surface, that they had to be played in relay by teams of two or more fishermen. They were harpooned when close enough (carefully in the head and perhaps by three harpoons), lifted by hoist and dragged to a matted area for killing.

“They were always approached head first,” wrote Boyd, “as even out of water they retain considerable power. Killing the fish was done by piercing the brain with a stainless steel spike entered expertly from a point halfway between the fish’s eyes. A steel wire of approximately one meter in length was then fed into the brain and down the spinal column, chasing out all the nervous responses and eliminating any thrashing that might damage the flesh or appearance of the fish.”

Market condition is everything with bluefin. Netting by purse-seining trawlers, as done by the Spanish and French, risks “tuna burn” of the interior flesh. Bluefin are warm-blooded creatures and need to be bled and the warmth sluiced out of them as soon as they’re caught and killed.

Longlining thus enables best market quality, even when returns are slim. The Koshin Maru used 120km of buoyed and braided longline, with some 2,880 baited hooks. Each setting took as long as 12 hours to haul and caught an average of one bluefin every thousand hooks. With a total of 166 tuna weighing 19 tonnes, it was not the best of trips.

East Atlantic bluefin have survived extreme overfishing. After 1997, longline catches fell by at least two-thirds. Even with quota protection, more than one in three wild fish was being caught illegally and perhaps smuggled to Japan through Mediterranean tuna sea farms.

The International Commission for the Conservation of Atlantic Tunas has, like European Union fishery ministers, been criticised for setting short-term quotas that ignored its own scientific advice. But with closer controls to rebuild the stock and evidence of sharp improvement, the commission has now set an increase in quotas to total 36,000 tonnes in 2020, of which EU states will share more than half.

So far, however, the only bluefin quota allocated to Ireland by the EU has been for just 1 per cent of bycatch (usually in seine-netting for albacore tuna, which has a quota). But these can’t be sold to Japan: even a 3m giant landed in Dingle in 2012 had to be marketed locally for much more modest reward.

Sea anglers and charter boat businesses were dismayed last month to be reminded by the Sea Fisheries Protection Authority that it’s illegal to catch, land or sell a bluefin. This followed the towing and landing of one at Teelín, Co Donegal.

Minister for the Marine Michael Creed has explained that the EU won’t allow recreational bluefin angling in Ireland, even with a catch-and-release policy, in the absence of a bluefin quota.

“It is extremely unlikely,” he said, “that we could obtain one as it would involve reducing the share of the total allowable catch of those EU member states that do have a quota . . . ”

Recent Irish investment in commission research on the bluefin off Ireland may take anglers a cast or two nearer to playing, hauling in and releasing a giant fish. But the bluefin fish drives water through outsize gills for extra oxygen and energy and must keep swimming or die.

How does this allow an angler’s triumphant photograph with Hemingway’s “king of all fish”? Official guidance is offered in Tasmania: a smallish bluefin may be cradled briefly, held upside down and horizontally with a wet cloth over its eyes. A large one must be released in the water, even by cutting the trace – and presumably thanked for the memory.

Driver may have travelled 22km with explosive device attached to car 19:08
Destitute in Dublin: ‘You are vulnerable in a tent. Nowhere is safe’ 18:43
Dublin homes within walking distance of park are worth more, conference told 18:08
Man who denies murdering he father says he was his mate 18:07
Court hopes to make final ruling on McNamara and Lowe insolvency arrangement 17:49