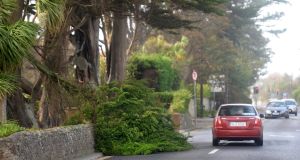 Hundreds of trees were blown down across the country on Wednesday by strong winds during Storm Ali. File photograph: The Irish Times

Legal cases taken over injuries involving fallen trees on Irish roads are becoming more common, due to recent severe weather events, according to one solicitor firm.

Liam Moloney, a Naas-based solicitor in Co Kildare, said his firm has seen an “uptake” in legal cases relating to fallen trees blown down during storms.

There is uncertainty as to where the liability lies if a tree damages property or injures someone, he told The Irish Times. Often it would be decided on a case-by-case basis if the fault lay with the landowner, or the local authority, he said.

There is an “obligation and duty” on landowners to fell trees that are insecure and carry out routine inspections into the health of trees on their land.

If a fallen tree is blocking a public road or path, there is also a responsibility on the local authority to remove it in a reasonable time after it is reported to them, he said.

“We’ve seen an uptake in the number of claims,” he said. Landowners with large trees fronting on to roads should survey the health of their trees every few years, which could be carried out at a reasonable cost by a tree surgeon, said Mr Moloney.

“We have had an increase in litigation following severe weather, [where] a tree collapses out on to a public road, and causes an injury to a person or property,” he said. Landowners had an obligation to fell trees that were in danger of falling, or else they could be held liable if the tree was blown down in a storm and caused injury, he said.

Hundreds of trees were blown down across the country on Wednesday by strong winds during Storm Ali.

Dublin City Council received approximately 500 reports from members of the public about fallen trees or branches this week. Although a spokeswoman said in many cases several calls could relate to the same trees.

Fingal County Council responded to 312 calls over damage caused by the storm, said a spokesman.

“The majority of calls related to fallen trees on roads, footpaths and green spaces around the area. A smaller number related to damage to private property such as houses and cars,” he said.

Malahide village in north Co Dublin was one area where particular damage was caused to several street lights by the heavy winds.