Event runs into Friday after Wednesday cancellation due to Storm Ali 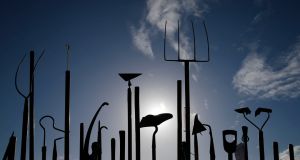 The National Ploughing Championships is in its third and final day on Friday after being cancelled on Wednesday due to strong winds from Storm Ali.

To make up for the day lost due to the weather the festival added an additional day on Friday. Gates opened at 9am, and tickets for Wednesday are valid for entry for the extra day.

Several tents and stands were damaged by the strong gales from the storm. A large marquee, known as the Blackwater, and an arcade containing several display stalls were blown over by winds.

Taoiseach Leo Varadkar will visit the championships today. Mr Varadkar will be taken on a tour of the site and stands, before watching a ploughing “masterclass exhibition”, organisers said.

Following the poor weather, some 81,500 visitors turned out on Thursday. The annual championships is playing host to 300 competitors and 1,700 vendors exhibiting their products.

There were some traffic disruptions heading into the event on Friday morning, with AA Roadwatch reporting traffic build-ups approaching the site on the N52 from Birr.

Events on through the day include various celebrity chef demonstrations, and organisers will be selecting a winner for the “most appropriately dressed gentleman” competition.

An estimated 291,500 visitors are expected to visit the 87th championship, held in Screggan, Co Offaly this year.