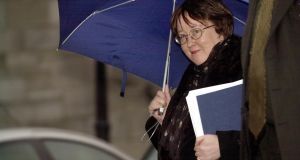 The Department of the Taoiseach has released records of Cabinet discussions for the first time after it lost a legal battle over the release of climate change documents.

The unprecedented release followed an Access to Information on the Environment (AIE) request made by the campaign group Right to Know (R2K) for documents on discussions about CO2 emissions between 2002 and 2016.

The request was refused by the department on the grounds of Cabinet confidentiality, but it was ordered to reconsider the application in a High Court ruling by Ms Justice Mary Faherty.

The release of the heavily-redacted Cabinet papers is, nevertheless, significant because the EU AIE Directive and the Aarhus Convention upholds the public’s right to environmental information, said solicitor, Fred Logue.

“The view up to now was that Cabinet confidentiality was absolute,” said Mr Logue, who made the request on R2K’s behalf, “But “there is always a public interest issue that has to be considered, even with Cabinet discussions”.

European Union takes has “ supremacy” on environmental issues. The environmental group has yet to decide if it will challenge the decision to redact so many documents, or withhold others.

With such a broad right to information around environmental decision-making, Mr Logue said he could see for example how the public might seek access to discussions about agricultural expansion, notably under Food Harvest 2020 and Food Wise 2025, which envisages massive expansion of dairying and beef production given their implications for green house gas emissions and water quality.

A total of 18 documents, most of which are heavily redacted, were released covering issues such as energy supply, emissions projections, the carbon budget and climate-related legislation. EU targets on reducing greenhouse gas emissions and adopting renewable energy feature regularly; notably in relation to 2020.

Niall Sargent, spokesman for the Environmental Pillar (representing the views of the environmental sector), said that while the documents released were heavily redacted, the outcome was historic and “entitles members of the public, journalists and NGOs to make an Access to Information on the Environment request through the Department of the Taoiseach which requires a weighing up of Cabinet confidentiality versus public interest”.

Climate change was going to become the most pressing issue over coming decades, and people were entitled to know what was going on behind the scenes and the thinking of every minister in government, he said.

The original 2016 request by R2K brought up 31 records held by the department. In May 2016, however, it refused to release any of the documents on grounds of Cabinet confidentiality.

R2K then requested an internal review of the decision, which was carried out by the department but “affirmed” the original decision not to release the records due to the “constitutional protection for the confidentiality of discussions at meetings of the Government”.

R2K was advised by the department it could make an appeal to the Commissioner for Environmental Information. However, the group declined and instead brought the case before the High Court on the grounds that the department was not permitted under EU law to blanket exclude all 31 documents from disclosure.

In an affidavit R2K founding member Gavin Sheridan said the case raised “fundamental issues” about the relationship between national and EU law, as well as issues around the transparency of the Government’s decision-making process on environmental issues.

The right to access environmental information was “central” to ensuring “effective public participation” in decisions on environmental matters and in ensuring powerholders were held accountable, he said.

“The public has a right to know how our Cabinet is discussing climate change, and what measures are being taken to mitigate its effects,” R2K submitted. “We also should know if what is being said at Cabinet reflects what is being said in public.”

In her ruling in June, Ms Justice Faherty agreed the department’s refusal was not in line with EU law and ordered it to carry out another internal review. Government discussions do not get a “class exemption” from disclosure to the public, she ruled.

“The classification of an entire type of environmental information as exempt from disclosure runs contrary to the letter and spirit of the [Aarhus] Convention,” she added.