What’s this pink stuff that fell from my window? Readers’ nature queries 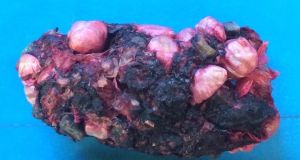 Eyes on nature: the pink stuff, presumably regurgitated by a bird, that dropped from Vincent Devlin’s window

I found some pink stuff on the floor that had dropped from my open Velux window. It looks like something that was regurgitated by a bird or animal. It was 35mm long and very light.
Vincent Devlin
Dublin

A month ago Helen Lawless of Mountaineering Ireland sent photographs of precisely similar stuff, which she found on two mountains 30km apart (St Luke’s, in the Mourne Mountains, and Slieve Gullion, in south Armagh), which suggests regurgitation by a bird. But what was it eating?

I found the insect in my photograph on my driveway recently. Just after I took the picture a robin landed and devoured it.
Robert Thompson
Saintfield, Co Down

It is the beautiful, native elephant hawkmoth, so-called because of the trunk-like snout of the caterpillar.

What a pleasure to watch the spotted flycatchers in our garden. They seem to be able to retain a fly in the beak while continuing to catch more.
Michael Brogan
Ballyhaunis, Co Mayo

I photographed this moth on my terrace in Tenerife. What is it?
James Cotter
Dublin

It is the death’s head hawkmoth, which occasionally visits Ireland in summer. (See Eye on Nature of September 24th, 2016.)

Could you identify this beautiful toadstool growing on a sycamore tree at Skerries Golf Club?
Brendan Crowe
Skerries, Co Dublin

It is a bracket fungus called Dryad’s saddle, which grows on the trunks and stumps of broadleaf trees.

My laurel hedge has been infested with the caterpillars in this photo.
Paul Brennan
Bennettsbridge, Co Kilkenny

It is the caterpillar of the magpie moth.