Take the slime of one black slug . . . A cure for warts

Another Life: Michael Viney on gastropods and their mucus 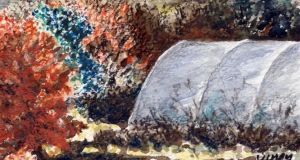 Bathed in moisture: A plastic polytunnel in the shelter of trees invites the growth of algae. Illustration: Michael Viney

Autumn brings determined demolition to the polytunnel, as the wreckage of courgette and tomato plants is cleared away for compost. The climbing beans, finally exhausted, had been annexed by scrambling nasturtiums (bright orange, rather gaudy, but bee-friendly), so that disentwining the vines from their poles was made even harder on my back.

Sagging at length into my canvas chair, I gazed up – to a remarkable celestial maze.

A plastic polytunnel in the shelter of trees, its outer surface bathed in moisture, especially invites the growth of algae. What its little cells feed on I am unsure, apart from raindrop minerals, but its deepening film tints the interior with an aqueous shade of green.

Like any other tunnel gardener, I am plagued with seasonal guilt in the need to do something about the algae, at some point, before too long. I have stuff to do it with and all the googled hints and tips, including one where my wife and I sling a soggy bed sheet across the top and march up and down, see-sawing on ropes, to rub the plastic clean. An unlikely prospect.

How gastropods move is of interest to research groups working on snail-like robots, among them a medical endoscope to crawl through one’s entrails

Gazing from the chair, I found, however, that the whole arching canopy, getting on for 100sq m, was interlaced with curlicues of crystal clarity: the trails of algae-grazing slugs or snails.

Some of the trails were as wide as my thumb, quite surpassing the silvery filigree found at morning on the mat beside the kitchen sink. And my view from below gave the tunnel trails a frilly quality, as if ruched (a good pub-quiz word) by deft Victorian seamstresses.

Later research revealed that this almost decorative detail comes from muscular waves in the gastropod’s foot. Moving faster than the animal itself, these propel it forward on a bed of mucus. The ripples in the teeth on the foot (the radula) pass scraped-off food to the animal’s mouth.

How gastropods move is of interest to research groups working on snail-like robots, among them a medical endoscope to crawl through one’s entrails. And recent studies at Stanford University have shown that the mucus produced by a slug or snail is not an essential lubricant. They can start to move without it, at least horizontally, on a fine film of water.

The main use of the gastropod’s slime is for stickability, as waves of motion travel through the foot, alternately lifting and pressing down. This matters most when crawling vertically or upside-down, and the animal can vary the mucus consistency by changing the pressure on it. (see “Do snails need their slime trails? It’s a sticky question” Stanford Report 2011).

Were my tunnel trails left by slugs, snails or both? On a suitably drizzly night, anoraked and booted, I went down the garden path with a flashlight, once before going to bed and again at 5.30am. Both times, the plastic was bare, except for a scatter of fallen leaves. One night was not enough, but I’m no scientist.

My guess is big slugs. The common big garden snail, Helix aspersa, is hungry for calcium and thrives quite riotously among the lime-rich sand dunes on the shore. My garden snails are mostly dark, and small, with low-budget shells.

The leopard slug prowls at night, grazing algae on rocks and eating the occasional, smaller, plant-munching slug of the kind that gardeners abhor

I do, however, have plenty of very big slugs. Among them is the grand Limax maximus, named like a Roman emperor but sometimes called the leopard slug because of its spots. Stretching up to 15cm long, it is common and widespread in Ireland, living mainly as a fungus-eater under tree bark or in rotting wood

It prowls at night, grazing algae on rocks and eating the occasional, smaller, plant-munching slug of the kind that gardeners abhor. So I have always handled L maximus with some respect, lobbing it more gently back into the trees.

There is an even larger Limax slug, the ashy-grey L cinereoniger, which at 20cm or more is the longest in these islands. In Ireland, however, it is missing from the central band of the island that ends at my hillside.

Another candidate might be the big, jet-black Arion ater that, on discovery, hunches up tightly into a corrugated prune. MolluscIreland, the excellent guide at habitas.org.uk (the Ulster Museum), describes it as “exhibiting a strong, rocking response when stimulated”, but perhaps I have never thought to tickle it.

A common folk use for a big black slug in England, it seems, has been secretly to rub one’s troublesome warts with its slime and then impale the slug on a thorn: as it melts away, so will the warts.

Really? For a fascinating scientific essay from Wales on the chemistry and potential healing properties of slug slime, plus a vindicating, well-photographed experiment on wart removal with mucus of the Arion ater, click here.