Small woods of native trees are beautiful but ecologically dodgy

Ecologists push for a critical mass of cover, extending and merging existing clusters 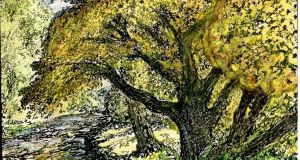 When this column began in October, 40 years ago, the acre had scraggy hawthorns leaning from the ditch, a big, wild willow sprawled across the stream and a storm-battered Sitka at the gate.

From then on, as new and aspirant tree-huggers, we planted seedlings as they came to hand and wherever seemed good at the time. Some I remember for friends who belong to them, and others that we stole on walks in distant woods. For the holm oak now high in the hedge, however, the field maples shielding the polytunnel, the poplars in the hollow, the exact provenance eludes me.

The more I name, the less indigenously Irish becomes the list: sweet chestnut, horse chestnut, sycamore, lime and beech. But then I can go on to native oak, ash, alder, birch, hazel, whitebeam, holly, rowan, guelder rose. Not so bad a mix after all, but a long way from a native spinney.

Storms, so far, have spared them, but the chainsaws whining across southern counties have sliced hundreds of trees into firewood. Many were roadside ash (which at least burns early and well). As native trees, replacement seems unlikely, their prospects blighted by storm gusts, worried farmers and the spread of ash disease.

The fate of Ireland’s scattered and surviving native woods is now the passion of many ecologists, and energetic NGOs such as Crann and the Native Woodland Trust. Not since the pagan days of tree worship have their virtues been so hallowed.

As documented in The Sacred Trees of Ireland, the classic study by Dr Anthony Lucas just republished by the Society of Irish Foresters, trees were revered for their magic and heroic legends, then for Christian saints and holy wells; above all for a communal sense of place. Today, native woods are exalted for their “ecosystem services” to human welfare and pleasure and as temples of native biodiversity.

The 1,320 sites totted up in the big national survey of 2008 are surviving fragments of former forests or more recent woodlands, lately established with state aid. They are mostly small or very small, half of them covering six hectares or less, only 10 of more than 100 hectares.

There are 481 woodlands continuously wooded since 1830, and at least 123 of these have the large coppice stools, plant communities, and documented history that mark them as “ancient”.

Most of all the woods are privately owned, with a small but important area managed by Coillte and the National Parks and Wildlife Service. That many are protected is thanks to EU membership and its habitats directive. To the woods of our imaginations, grand and golden, it added bog woodland, yew woods, alluvial forest, limestone hazel scrub – all now priorities for conservation.

Ireland has only about 30 different trees and shrubs and less than its share of woodland flowers, but many woods have some of the richest displays of mosses, liverworts and lichens in Europe.

In moist Atlantic oakwoods such as Brackloon and Old Head, here in Mayo, their species outnumber flowering plants.

Small woods can be beautiful but are ecologically dodgy, lacking levels of shade, humidity and shelter that are vital for many kinds of flora and fauna. In a major new publication from NPWS and the Forest Service, Management Guidelines for Ireland’s Native Woodlands, ecologists John Cross and Kevin Collins urge the creation of a critical mass of cover, extending and merging clusters of native trees and linking them with corridors of riverside woodland.

Many existing woods mix native with alien, invasive trees. The takeover of big estate woodlands by early state conifers has been widely remedied, as at Brackloon. Two non-native broadleaves, beech and sycamore, are now among the targets, shading out regenerative native growth or smothering it with seedlings.

After fencing out destructive grazing, especially by deer, the guidelines’ big maxim for tearing out the aliens is to “make haste slowly”. They make it very clear that repairing , extending or creating native woodland is no simple undertaking – nor, even with State grants, an especially cheap one.

It is essential, say authors Cross and Collins, to have a tailored, long-term, rolling plan “drawn up, implemented and monitored by an experienced woodland ecologist working alongside a professional forester knowledgeable in close-to-nature silviculture and a forest contractor well-versed in working on sensitive sites . . .”

A lot of detailed effort, then, to restore the kind of woodland, of centuries past, that we might all enjoy and benefit from. This is “restoration ecology”.

What man has already done to the island has permanently changed the kind of woodland its climate and geology might naturally shape for it. John Cross, however, once compiled “an outline and map of the potential natural vegetation of Ireland”, showing nine big forests of different sorts (in Applied Vegetation Science 1: 241-252, 1998 ).

Left to nature, it’s chastening to see, our acre would probably go back to blanket bog,