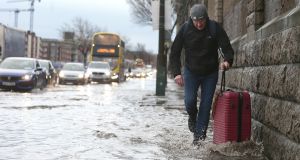 A pedestrian wheels a suitcase on a flooded path across from Victoria Quay in Dublin city centre. Photograph: Damien Eagers/The Irish Times

Met Éireann has issued a status orange wind warning covering nine counties as Storm Dennis sweeps across the country bringing gusts of up to 120km/h.

The forecaster issued an orange warning on Saturday afternoon which applies to counties Cork, Clare, Kerry, Limerick, Galway, Donegal, Leitrim, Mayo and Sligo. It is valid from 10am on Sunday and is due to remain in place until 10pm that day.

“Southwest winds with mean speeds of 60 to 80km/h with severe gusts of up to 120km/h [are expected], strongest on exposed hills and coasts, with a risk of coastal flooding,” the advisory note states.

Orange warnings are the second-highest caution issued by the forecaster and usually mean that infrequent but dangerous and disruptive conditions are en route.

Two other weather warnings, status yellow rainfall and wind warnings, were also in force for all of Ireland this weekend.

The rain warning cautioned that spells of “heavy, locally thundery rain” will lead to some flooding. The warning came into force at 6am on Saturday and was in place until 9pm the same day.

The status yellow wind warning highlighted the risk of southwest winds which would result in gusts of up to 110km/h and mean wind speeds of 50km/h to 65km/h. This warning was in place until 11pm on Sunday.

A status orange marine warning for gale force winds was also in place on all Irish coastal waters and on the Irish Sea.

“South to southwest winds will reach gale force 8 or strong gale 9, today and tonight, on all Irish coastal waters and on the Irish Sea, reaching storm force 10 in Atlantic sea areas on Sunday,” Met Éireann stated on Saturday.

Met Éireann forecaster Matthew Martin said the risk of flooding was high because the ground is “completely saturated” due to the wet weather over the past week as a result of Storm Ciara.

“It is going to be a very unsettled weekend, and we will see deepening storm conditions over the next 24 hours,” he said on Friday.

“Saturday will see a frontal move across the country, bringing strong winds, heavy rain and a risk of local flooding. It won’t require much rain to cause local floods due to the ground being completely saturated.”

About 3,000 properties had been left without power by Saturday afternoon.

Motorists are being advised to slow down, be aware of reduced visibility, look out for pedestrians, cyclists and motorcyclists impacted by the windy conditions and to allow more room to brake on the roads.

AA Roadwatch said a number of areas in Sligo were badly affected by flooding and heavy surface water, with the Bundoran Road heading out of Sligo town “particularly bad as well as areas around Strandhill”. It said there was also flooding on the N59 at Ballisadore.

In Kildare, AA Roadwatch said there was heavy flooding on the M7 westbound between J10 Naas South and J11 M9 and on the N7 at J3 Citywest.

Flooding was also reported on the N59 in Co Mayo, as well as in Tralee, Co Kerry and in Co Laois.

Dublin Airport said a small number of flights had been cancelled to and from the airport as a result of Storm Denis. Passengers were advised to check the latest flight information with their airline before coming to the airport.

Aer Lingus tweeted on Saturday night that the storm would present a challenge to its Sunday schedule.

Irish Ferries reported that a number of sailings between Dublin and Holyhead on Saturday and Saturday night were cancelled as a result of the storm.

Met Éireann is forecasting further spells of heavy rain and a continued risk of flooding.

“The rain will eventually break up into showers towards dawn. Winds will ease off somewhat for a time inland, but gales will continue in coastal counties. Lowest temperatures of 1 to 4 degrees,” it said on Saturday.

“The effects of Storm Dennis will continue on Sunday. A very windy day with stormy conditions in Atlantic coastal counties. Sunshine and widespread heavy squally showers, especially in the north and west, with a risk of hail and thunder.”

The National Parks and Wildlife Service said members of the public in affected areas are advised “not to visit any national parks, national monuments or nature reserves whilst the status orange is in place”. Additional reporting: PA