Christmas shoppers were battered by Storm Deirdre as 130kmh winds, rain and sleet hit the nation over the weekend. Thousands of homes and businesses were left without electricity as the storm moved across Ireland causing flooding in some parts. 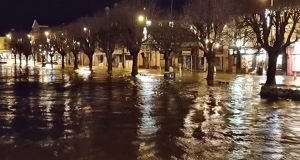 Thousands of homes and businesses have been left without electricity as Storm Deirdre moves across Ireland.

A status orange weather warning is in place until 10pm on Saturday as the storm brings heavy rain and winds of up to 130km/h.

In Cork city, a nine-year-old girl was taken to hospital after being injured by a falling branch at about 5pm. Her injuries are not believed to be life-threatening.

Flooding was reported in places, particularly in the southeast. AA Roadwatch said roads around Enniscorthy were closed due to flooding.

Wexford County Council advised people to stay away from the promenade in the town which is flooded and “dangerous as a result”.

In Co Down, motorists struggled to drive through a deluge of rain which left some roads badly flooded.

ESB Networks said resources were on standby as the storm tracked northeast across the country. More than 4,000 homes and businesses were without power in west Cork while outages have also been reported in parts of Donegal.

Flooding on the River Derneen and River Derry in Carlow and Wicklow. More expected today and then potentially a lot more on Monday night and Tuesday. Those in areas prone to flooding near to be on alert. #StormDeidre pic.twitter.com/khf8N7XoeQ

The Road Safety Authority advised people to slow down when driving as visibility was likely to be reduced and stopping distances increased during the storm.

Met Éireann said Storm Deirdre was likely to “move quickly across the country this afternoon and evening and will move through the Irish Sea early tonight. It will give some squally, damaging winds in all areas for a short period of time”.

The forecaster said the winds would peak in the afternoon in Munster and Connacht and in Leinster and Ulster in the early evening.

A status yellow rainfall warning was issued with up to 5cm of rain forecast while a separate status yellow wind warning is in place for Dublin, Louth, Wexford, Wicklow, Meath, Donegal, Cork and Waterford.

The National Parks and Wildlife Service urged the public not to visit Killarney National Park on Saturday afternoon due to the risk of falling branches and debris.

Retailers urged people not to be deterred by the rain and winds and asked them to avoid making unnecessary journeys by spending their money locally.

With just 11 days and two weekends to go until Christmas, ISME, the Irish small and medium enterprise association encouraged consumers not to be put off by Storm Deirdre and to consider spending their money in the businesses in their communities.

“Undoubtedly, this weekend’s weather will impact shopping numbers on what is one of the busiest shopping weekends of the calendar year,” said ISME chief executive Neil McDonnell.

He appealed to Irish consumers “to continue to support local producers, manufacturers, and retailers by shopping and dining local”.

Mr McDonnell pointed out that every €10 spent locally on Irish products generated more than €40 of benefit to the local community in employment terms and he stressed the importance of the retail sector local economies across the State.

The St Vincent de Paul charity said it was taking steps to ensure those who rely on its services in the capital city were kept safe. “Due to the increasing bad weather and severe weather warnings in place our services at Blessington Street and Mount Brown will be open for 24 hours. Be mindful and keep safe as conditions worsen,” the charity said in a tweet.– Additional reporting: PA