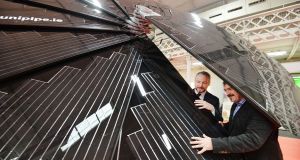 Before this summer, stories about the Irish homeowner relying on solar power to heat and light their home sounded like the beginning of a bad joke, but perhaps no.

Even in a bad year, Ireland gets 70 per cent of the sun Madrid gets, so it is a contender, if not for everyone. A 20sq m solar photovoltaic (PV) system costs about €5,000 and could generate over 40 per cent of the typical Irish home’s annual electricity demand.

That could save €500 a year. However, the electricity, in most cases, cannot be stored and must be used immediately, though solar is generated during daylight hours, predominantly around the middle of the day when most people are at work.

Equally, 75 per cent of the annual energy from a solar system is produced between May-September when people typically need it least. Systems can be upgraded to store power and heat water, but that adds to costs.

Meanwhile, unused generated electricity can be supplied to the national grid, but there is no system to ensure that people can get paid for it – as happens in other countries, though that will, inevitably, change in time.

The Irish Solar Energy Association (ISEA) argues that the case for people installing their own solar PV is, however, improving – though it stresses that simpler options to cut bills, such as insulation, draught-proofing, improved windows, boiler controls, etc, should be done first.

Earlier this year, Minister for Climate Action and Environment Denis Naughten announced grants for roof-mounted solar grants: “Solar PV will certainly contribute towards the decarbonisation of our electricity supply in the future,” says Brian Denvir of the ISEA.

“There is considerable potential for domestic solar PV in Ireland especially as the costs of solar modules and supporting battery storage technologies continue to decline,” he adds. In time, every house will be fitted with a panel as a matter of course.

“Even today, a large share of new homes are being built with solar PV as Irish building regulations now require a portion of a new home’s energy to be supplied by renewable sources – in many cases solar PV is the most cost-effective way to deliver this,” he says.

The next step is Building Integrated Photovoltaics (BIPV) – building materials with electricity-generating semiconductor materials embedded within them, such as solar tiles (like those produced by Tesla), solar cladding and solar windows.

These products are more pleasing to the eye, so architects favour them over conventional panels, but they have yet to prove that they can compete on cost, or last as long: “But they are showing great promise,” says Denvir.