Robinson calls for Europe to push on emissions cuts 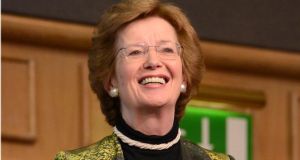 Mary Robinson says it is “incredibly important that Europe will be at the heart of a progressive alliance for a new climate agreement” at the UN conference in Paris in 2015. Photograph: Dara Mac Dónaill / THE IRISH TIMES

EU heads of state and governments need to adopt an ambitious target to cut carbon emissions if Europe is to retain its leadership on climate change, according to former president Mary Robinson.

Speaking to The Irish Times after last week’s UN climate summit, she said it was “incredibly important that Europe will be at the heart of a progressive alliance for a new climate agreement” at the UN conference in Paris in 2015.

She called on Europe’s leaders to adopt the climate and energy package put forward by the outgoing EU Commission, which proposes a 40 per cent cut in greenhouse gas between now and 2030 and a similar share for renewables in the EU’s energy mix.

The climate summit in New York, convened by UN secretary-general Ban Ki-moon, had shown that “we have learned from the mistakes made in Copenhagen” in 2009, when world leaders arrived at the last minute and the conference turned into a debacle.

This time they had all been requested by Mr Ban to spell out what their respective countries were doing and intended to do about climate change a full 15 months before the Paris conference, at which an international agreement is meant to be concluded.

She said climate had moved up the political agenda. “What is vital is that we keep it up the agenda because this issue has to be a priority. Otherwise, we are condemning millions to doom and gloom”.

What most impressed her were the commitments being made to low-carbon development even by highly vulnerable small island states, such as Tuvalu, and major developing countries in Africa, such as Ethiopia.

Ireland had “not yet” indicated how much it would contribute to the new Green Climate Fund, she noted. “There’s a pledging conference in November.”

Mrs Robinson said it was a “very important signal” for poor developing countries that funding would be available to help them adapt to climate change. “France made a big commitment, also Denmark, but we’re still far below the $10 billion that’s needed” by December.