The song of birds has engaged the human psyche for centuries

‘You could argue that blackbird sings the words, whereas mistle thrush speaks them’ 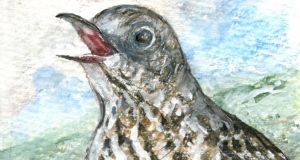 As an eccentrically early riser, I share the first birdsong of the morning long before sky and sea have agreed the horizon. A skeletal hawthorn, proud above the hedge outside my study window, is a song-post for blackbird, robin, sparrow and dunnock, defying double-glazing in the velvety dark.

The medley broadens with the dawn to bring in tits and finches, the song thrush and wren and a collared dove from down the road, but, out early in the sun, one singer halts me in my tracks, not moving a muscle until he’s finished what he has to say.

In spring’s territorial carve-up, the mistle thrush compels a singular attention to its song

The mistle thrush is the big one of the tribe, upright, even martial, in its bearing. Some people know its voice only by its football rattle in mid-flight. That can be a winter warning, driving off competitors for a berried holly tree.

But my first audition came a couple of springs ago, when a mistle cock shot up from its nest in the spruce tree at our gate to drive a passing raven from its flight-path to the hill.

In spring’s territorial carve-up, the mistle thrush compels a singular attention to its song, delivered with fine clarity and audible, by report, 2km away. It’s an utterance as varied and often as sweet as a blackbird’s (another thrush) but sung in a thoughtful, measured manner, phrase by phrase. Anthony McGeehan, the Belfast birder, put it well: “You could argue that blackbird sings the words, whereas mistle thrush speaks them.”

Again this morning, the bird chose as its rostrum the aerial at our gable that brings us wireless broadband from Inishbofin. He directed his notes seaward as if offering some response to the island. Folklore has called the thrush the “storm cock”, marrying its song to a warning of wind and rain – often a fair promise in the west, even on a blue-sky morning.

The song of birds has engaged the human psyche for centuries (“lhude sing cuccu”). And the creatures themselves were so conveniently captive and messed about with that the attraction for science goes back a long way.

Musicians were among the first to bring notation to the flood of bird phrases, and guidebooks abound in attempts at phonetic rendering. But beyond some remarkable historical insights, scientists had to wait for the 20th-century tape recorder and the jagged, graphic patterns of the sonograph.

A sonograph is a bleak enough sound-signature, but there are now good online sources that match them to their recordings. “Xeno-canto” is one that shares bird songs from around the world. Listening to the mistle thrushes on offer from some 500 European tapes (all with mapped sources), I found the nearest match to Thallabawn’s current songster somewhere in wildest Norway.

Birdsong has been tailored to environment, and female birds respond best to cocks with familiar local dialects as well as the strongest repertoires. But the origins of birdsong lie within the challenges of Darwin and natural selection.

Learning by each generation is something shared only by some mammal groups, including humans, and in the avian world has brought an intensity of study that has included, regrettably, many deliberately and selectively deafened birds and much laboratory slicing of brains in the mapping of neurobiology.

As far back as 1773, English lawyer Daines Barrington showed that cross-fostering of young birds could lead birds to learn the song of the wrong species – a linnet that of a skylark, for example. But chicks do seem to start with some genetic template that makes their hearts beat faster when they hear the song of their own species, and this is the one they prefer to copy. Birds can, however, be “tutored” and one study claims that “nightingales can almost fully reproduce tapes of 60 bird songs that they have heard only once a day for 20 days”.

I prefer, I think, to have learned about a bird’s vocal mechanism, the syrinx, an organ found in no other animals. Located deep in the bird’s chest, where the two bronchii join the trachea, its internal membranes come together in a seam like that between the legs of trousers.

I’m sorry it has needed live pictures from an endoscope to establish how it works. For one thing, when a bird sings the two sides of the syrinx operate independently and the sound is frequently switched from one side to the other, both between syllables and within a syllable.

“When both sides produce sound simultaneously,” one study concludes, “their respective contributions are seldom harmonically related.” Another writes of “ frequency jumps, subharmonics, biphonation and deterministic chaos “ in the voice of many birds.

The idea of “two-voice” syllables reminds me of my first attempts with a mouth organ – a not always displeasing sound, at least to me. And to learn that the dominant sounds in a chaffinch’s song arise from the left side of the syrinx will have me listening even more closely to that defiant, two-toned flourish at the end.