Secretary-general expects ‘very meaningful’ climate commitments to be nailed down 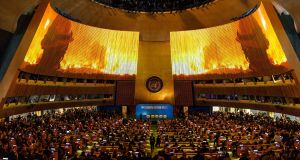 The climate emergency “is a race we are losing, but it is a race we can win”, the UN general secretary Antonio Guterres said at the opening of the special climate summit attended by more that 100 global leaders.

He said: “Governments are here to show you they are serious about enhancing Nationally Determined Contributions under the Paris Agreement. Cities and businesses are here showing what leadership looks like, investing in a green future.

“Financial actors are here to scale-up action and deploy resources in fundamentally new and meaningful ways. Coalitions are here with partnerships and initiatives to move us closer to a resilient, carbon-neutral world by 2050.”

More than 60 heads of state announced a wide range of measures, which he previously acknowledged might not lead to an immediate reduction in global emissions, but there were strong indications that commitments to scale up ambition under the Paris Agreement in 2020 will be realisable.

Mr Guterres said he expected “very meaningful” climate commitments to be nailed down by the conclusion of the summit.

“I see a new momentum,” he said. “I believe in these last few months [there has been] a turning point. Six months ago, I must tell you, I was quite pessimistic about everything. I would see no movement, now I see a lot of movement and we need to boost that movement.”

However, he warned: “Science tells us that on our current path, we face at least 3-degrees Celsius of global heating by the end of the century.”

Midway through the summit, however, the environmental group Climate Nexus said world leaders had failed to deliver. “The summit offered a clear dividing line between those who take climate science seriously and those lagging behind,” it added.

International donors agreed to free up more that $500 million in aid to protect tropical rainforests including the Amazon where wildfires have been raging over the past few months. In August, G7 countries offered $20 million of emergency aid to help Brazil, but this was rejected by its president Jair Bolsonaro.

The new fund was announced by the French president Emmanuel Macron in the wake of the Brazilian Amazon facing its worst spate of forest fires since 2010 – it prompted a global outcry as tropical rainforests are the world’s most important carbon sink, and their destruction generates large volumes of greenhouse gases.

France, Chile and Colombia on the sidelines of the summit agreed terms, despite the absence of Mr Bolsonaro, a climate change sceptic who is promoting development in the Amazon region.

“Everybody thinks ‘How are you going to do without Brazil?’” Mr Macron said during a speech. “Brazil is welcome and I think everyone wants to work with Brazil . . . .It will come, it takes a very inclusive approach.

“For every dollar spent restoring degraded forests, as much as $30 can be recouped in economic benefits and poverty reduction,” Mr Guterres said.

British Prime Minister Boris Johnson said: “As we destroy the world’s forests, we drive ever more species to extinction, we erode nature’s ability to cope with climate change and we undermine the livelihoods of millions of people.

“The UK recognises that we are at a tipping point and that action now is both urgent and essential.”

Bank of England governor Mark Carney said the financial sector must transform its management of climate risk, warning that global warming would prompt reassessments of the value of every single financial asset.

“Climate disclosure must become comprehensive, climate risk management must be transformed, and sustainable investing must go mainstream,” he said at the summit.

Mr Carney has been a leading voice among regulators in warning of the risks climate change poses to the stability of financial markets.

“The world won’t get to net zero if the financial sector doesn’t know how companies are responding,” he added. “To watch, you need to be able to see.”

The summit coincided with a series of commitments by major companies and banks to reduce emissions; the international shipping company Maersk, for instance, committed to “commercially-viable” zero emission vessels on deep sea trade routes by 2030.