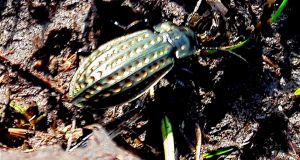 This slug was suspended from the roof of our tunnel on a self-produced thread, approximately 4ft from the ground.
Domnall Fleming, Lisheens, Co Cork
Slugs, members of the Arion family, have been seen extruding a mucus string and descending on it. They probably do it at night unobserved.

I’ve been under the impression that cowslips had virtually disappeared from the Irish landscape. To my delight I saw them in profusion along the banks of the railway line between Ballybrophy and Cloughjordan in mid-May.
Eithne Cavanagh, Blackrock, Co Dublin
Cowslips are widespread in the central part of Ireland and less frequent in the north and south. They favour chalky soils.

We spotted this beautiful beetle on the bog. His back was sparkling like tiny diamonds in the sunshine.
Emer O’Toole, Inverin, Co Galway
It was the bronze ground beetle, Carabus nemoralis.

I found these two objects on nettles and wondered if they were pupae belonging to a moth.
Frank Folan, Ballyvaughan, Co Clare
While they look like pupae, they are two different stages of the nettle rust gall, Puccinia urticata. (a) is an early stage and (b) is the spore dispersal stage.

I found this paper-thin creation on a briar that I pulled off an old wall. It was about the size of an egg and, like Russian dolls, had a smaller one inside and another inside that. There was a honeycomb structure in the bottom.
Arthur O’Donnell, Cahir, Co Tipperary
It looks like the nest of a tree wasp, which is small and paper-thin. The first nest started by the queen of the common wasp is more robust.