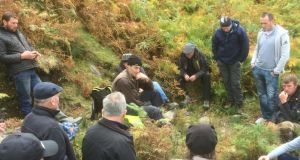 Mountain habitats under threat from environmental degradation are to be managed through a new partnership between State bodies and upland communities.

Focus will be on agriculture, tourism, social heritage and conservation, and Ms Mulvey said there is a “real need for the voice of the uplands to be heard at all levels in national policies”

Already, plans have been laid for grant-aided cross-county visits to share experiences and training,

Some 200 members of 25 groups are undertaking research trips. Recently, for instance, Kerry farmers in the MacGillycuddy Reeks Mountain Access Forum hosted a visit to the Reeks by members of the Leenane Development Association of Co Galway.

A study undertaken by Teagasc, the agriculture food and development authority, found that only 18 per cent of farmers had stock grazing upland areas in 2014, compared to 90 per cent in 1999.

It found that farming with locally led agri-environmental schemes was still the most sustainable and economically beneficial way of managing the State’s uplands.

Ms Mulvey, from Co Leitrim, has previously worked with the English Tourist Board, Board Fáilte, Heritage Towns of Ireland, the Irish Peatland Conservation Council, Greenbox and Ecotourism Ireland.

Speaking at an Irish Uplands Forum conference in Mulranny, Co Mayo, she said that the underlying vision of the uplands network was to “maintain upland communities and Ireland’s mountain environs as attractive, vibrant and welcoming places where people live, work and recreate”