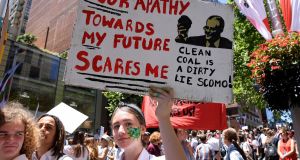 ‘Why should I be studying for a future that soon may be no more, when no one is doing anything to save that future? And what is the point of learning facts when the most important facts clearly means nothing to our society?”

It is hard to argue with the razor-sharp logic of 15-year-old Greta Thunberg, as she spelled out to the UN climate conference in Poland last week the reason why she has embarked on a “climate strike” in Sweden since September.

“Since our leaders are behaving like children, we will have to take the responsibility they should have taken long ago,” Thunberg added.

She has a point. And if you doubt it, consider the recent statements made by Ireland’s most senior civil servants representing the “public interest” to the Oireachtas Committee on Climate Action. Flanked by advisers, they trooped in, day after day, to explain why Ireland, a wealthy nation, cannot possibly be expected to meet even its minimum legal and ethical obligations on climate action.

Their positions both reflect and amplify the political lacuna that engulfs almost every effort at meaningful environmental stewardship in Ireland. These same officials and politicians doubtless have children they care deeply for and actively plan for their future. Yet their actions and inactions are in a very real sense helping to burn that same future to the ground.

Naturalist, David Attenborough (92) was a young teenager just as Europe exploded into the deadliest conflict in human history. Today, he is adamant the threats facing the world are immeasurably greater than even the second World War.

“Right now we are facing a man-made disaster of global scale, our greatest threat in thousands of years: climate change”, Attenborough told a stunned audience in Katowice, Poland. “If we don’t take action, the collapse of our civilisations and the extinction of much of the natural world is on the horizon.”

Last month, thousands of Australian students, inspired by Thunberg, walked out of their schools for a one-day strike. Some were threatened with disciplinary action. Australian resource minister Matt Canavan jeered that they should be in school learning about mining, and all they would learn on their protest would be “how to join the dole queues”.

It takes profound cognitive dissonance for otherwise intelligent adults to pretend not to grasp basic science. “Why should we go to school when you won’t listen to the educated?” read one of the posters at a rally in Sydney.

“Nothing could be more damaging for our democracy than for budding citizens to be told by the powerful to get back in their boxes and shut up,” ethicist Prof Clive Hamilton wrote last week. “Thank God the kids have decided they won’t be bullied.”

School protests have now spread to the Netherlands, Germany, Finland and Denmark. When will we see the first one in Ireland?

As a citizen and journalist, I am angry and frustrated at the appalling cynicism in Ireland’s collective non-response to this unfolding tragedy. But as a parent, I am simply terrified.

Why I would like to see a strike in my school

When I think about the world around me today I can’t help but fear for my own future. Every single day, fossil fuels are being burned and more species are going extinct. The natural world has been so severely damaged, I honestly don’t see much hope for my adult life.

When people talk about climate change it is never described as a crisis or something that should be dealt with now. It is not something that many people think about going about their day to day lives but it is what will have the most effect on our lives in the coming years.

We are treating this earth like we have a second one to go to or a “plan B” but we don’t. This is where we live, this is the only planet we can live and thrive on and we are throwing it all away. Politicians and other adults who we children and teenagers look up to and who we are told to trust are just ignoring this crisis. I know that scientists have been trying to warn them that the world is in danger due to human actions.

More action needs to be taken, this is our future more than theirs. Many of today’s adults won’t have to worry about what’s happening in 40 or 50 years. It is us, the children of this generation who will be so greatly affected, we will have to pick up the broken pieces of our world once we become adults. Our children may never know what an elephant or a tiger is because they were all killed off before they were even born. Even the birds are disappearing.

I admire what the school strikers are doing and I would love to see it happen in Ireland – and in my own school.