Coastwatch voluteers finds 18 bottles for every 500 metres of shoreline 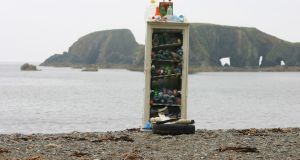 A Coastwatch volunteer collected this waste in one outing on a small stretch of coastline between Garrarus beach and Kilfarrasy Beach on the Co Waterford coastline. The haul includes a fridge and many plastic bottles.

Drinks containers, particularly plastic bottles, are the most frequent form of litter found on Irish coastlines, according to the environmental group Coastwatch.

Volunteers found 18 bottles for every 500 metres of coastline they surveyed last year, despite a big increase in shore cleaning.

“Plastic bottles are very visible and easy to pick up, and yet they continue to occur in such large numbers,” said Coastwatch director Karin Dubsky.

To achieve the same reduction as has been achieved with plastic bag litter, the group says a deposit-on-return system is required.

Such schemes were operating successfully in Germany and Denmark and have greatly reduced marine litter, she said.

Plastic, including plastic shopping bags and lighters, accounted for 16,738 items identified. Some 8,804 plastic drinks bottles were counted, among the lowest count since 1991.

Landfill materials were found in a quarter of all shores surveyed; this is thought to be related to the rise in construction activity. This was the most frequent source of large waste, and the highest level recorded in the past 6 years. Most was demolition waste, often put in place by a landowner to control erosion.

Coastwatch, which is marking 30 years in existence, has called for the creation of a “latte levy”, but with money collected going back into an environment fund. This in response to the scale of unrecyclable coffee cups in circulation in Ireland. “The tax introduced should be high enough to encourage the consumer to drink from traditional cups, or bring their own keep cup,” it added.

In a separate Coastwatch survey of drink container use, a total of 4,290 people were observed over five days during early February in Dublin city centre.

Less than 3 per cent carried a reuseable drinks container and disposed of it in a bin.