Sweden has most ‘shelved’ mobile phones per capita at 1.31 while the Irish figure is 1.01 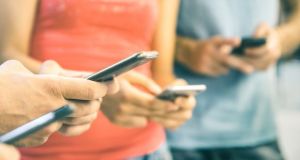 A global build-up of discarded but not defunct smartphones is highlighted in an index of 27 countries, which analyses current levels of reuse and recycling.

Published on Thursday, the data confirms in many developed states the mobile phone has become “the most disposable form of technology”, where more “shelved phones” are discarded than they have people living in the country – notably in Sweden, Finland and the UK.

Ireland ranks 14th out of 27 with 1.01 shelved mobile phones per capita, but is in fifth place on recycling and reusing mobiles with a rate of 84 per cent. The Republic’s overall national rate for all recyclable materials is 41 per cent .

Whereas in the past, the majority of e-waste included products which had broken or become obsolete, technology trends and the pressure to have the “latest” tech, particularly with mobile phones, means growing volumes of e-waste are products which have gone “out of fashion” rather than defunct, it notes.

Sweden has the most “shelved” mobile phones per capita, at 1.31; “Swedes have more discarded phone models gathering dust in their homes than they have citizens” – in Ireland the figure is 1.01.

The US has the highest number of shelved mobile phones at 223 million, followed by Germany, at 84.7 million, and the UK at 83.1 million – the Irish equivalent is 4.9 million smartphones.

In the first analysis of its kind the research makes a country-by-country comparison of estimated mobile phone e-waste, and of potential environmental and economic value of old models if recycled. It is largely based on official national data.

The total number of shelved phones for the 27 countries equates to a sales value of €1.9 billion in precious metals such as gold, silver, palladium, platinum and copper.

Not only are mobiles one of the most popular forms of technology, they have become the most “disposable”, according to reBuy, the German used electronics online shop, which commissioned the research.

The total e-waste generated by the countries is 23,964 tonnes, “equivalent to more than 54 Boeing 747-8 aeroplanes at maximum take-off weight (442 tonnes each), or more than 138 blue whales (173 tonnes each)”. Ireland generates 155 tonnes of smartphone e-waste annually, it estimates.

Chief executive of reBuy Philipp Gattner said: “With this index, we want to educate people about e-waste and help everyone to consider buying refurbished tech products to give technology a second-life. Or if they do invest in new electronics, to make sure that they properly recycle their old items by looking up their local e-waste recycling facility, instead of throwing them onto landfill.

“Almost all e-waste contains some type of recyclable material such as plastic, glass and metal, and by correctly recycling electronics, you reduce the amount of dangerous toxic chemicals such as lead and chromium leaking into our soil, resulting in a healthier, safer world,” he added.

The data is based on the EU framework for calculating e-waste, complemented by online survey data to create comparative data sets.

The number of mobile phones in each country was determined including those which are actively used and those “shelved”, meaning models that are not in use, nor yet disposed of.

The analysis looked at how many of those used models were second-hand and calculated the total number of shelved mobile phones which could be recycled or resold. It finds 28 per cent of mobiles per Irish household are used.

The study also looked at mobile phone disposal, calculating how many handsets were regifted or resold, the amount of e-waste generated by improper disposal of mobile phones, and the recycling and reuse rate, which looks at the percentage of phones correctly disposed of in electronic recycling centres or return-to-seller collection schemes.

The average smartphone contains 30 different elements while some high-end models at as many as 75. Tantalum, yttrium, gallium, indium and arsenic are all key ingredients that could run out within 100 years.

Indium is crucial to both touchscreens and solar panels. It’s transparent, adheres to glass but has no other known use. It is one of the rarest elements on Earth; a by-product of zinc mining. To get a few milligrams of Indium a kilogram of zinc has to be mined.

Extracting these metals is costly, energy-intensive and often leaves toxic waste in its wake. The vast majority of rare-earth metals are mined in China, where their extraction has polluted major water sources.

“Rare earths” are a specific category of 17 different minerals. Like other key tech ingredients – such as cobalt, tin, tungsten and gold – they have also been linked to exploitative operations that use child labour and fund conflict in Africa, and to respiratory diseases among miners.

E-waste, known as WEEE, is one of the fastest growing waste streams in the developed world though improved regulation of collection, recycling and disposal has come through an EU directive, to which Ireland has fully signed up.