Plankton, salt sprays and other potential solutions to climate change 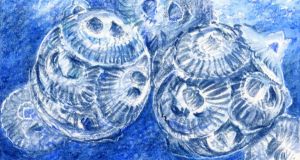 Emiliania huxleyi, a type of phytoplankton which could prove useful in the fight against climate change. Photograph: Michael Viney

You could really feel it in the High Arctic when the summer sun went in. One minute, with a heavy pack, your shirt was stuck with sweat; with shadow came the creeping embrace of cold.

That was in early June almost 40 years ago, with the thaw just begun in northeast Greenland. This year, the ice began to melt in the south on April 7th, a full month ahead of “normal”.

Climate change is warming the Arctic twice as fast as anywhere else, as loss of white, reflective ice leaves a dark sea to soak up the sun’s radiation. This melting of Greenland’s massive icecap will raise Europe’s sea level and slow the ocean circulation that draws the Gulf Stream north to warm our winters.

To help the planet regulate global warming with extra clouds, one researcher has turned to the plant life of ocean plankton

More shiny-topped clouds are the answer, as a good many scientists believe. Replacing the “albedo” of ice, they would reflect more radiation back into space. But clouds can also act like a blanket, trapping any warmth rising from the ground – or the sea. New research suggests that, in the Arctic autumn, summer heat escaping from patches of open sea is trapped by local and low-level clouds and make ice melt even faster.

The Arctic’s summer clouds are blow-ins from the south. Adding more and making them brighter is a current ambition of “geoengineering” to modify climate change.

Clouds are made from water vapour droplets forming around “condensation nuclei”, most of them particles rising from the sea. The finer the particle, the brighter its reflection, and sea salt offers some of the finest. A project devised and engineered by two UK scientists, John Latham and Stephen Salter, proposes spraying the atmosphere with salt particles under a micron in size from a fleet of 300 automated vessels.

This, it’s claimed, could allow Arctic ice to return, be deployed to disarm Caribbean hurricanes, and generally reduce global warming by 1.5 degrees Celsius. Such strategies are opposed for their potential unintended impacts on climate and for distracting world effort to cut CO2 emissions.

An alternative technology has been suggested by Prof James Lovelock, whose compelling “Gaia” hypothesis offered science the view of Earth as a living, self-regulating organism. To help it regulate global warming with extra clouds, he has turned to the plant life of ocean plankton.

Even more efficient than salt in providing nuclei for cloud formation are droplets of sulphuric acid. These are contained in the gaseous aerosol dimethyl sulphide, given off by phytoplankton, notably the Emiliania huxleyi of my drawing.

Blooms of this plankton cover large areas of ocean where enough nutrients, notably nitrogen, have welled up from the seabed of the continental shelves, largely through the churning of storms. But some 40 per cent of Earth’s surface is deep tropical ocean where surface water is as “bare” of nitrogen as a desert on the land.

Lovelock’s idea involved sinking masses of vertical pipes, 10 metres wide and hundreds of metres long, to induce artificial upwelling and nourish algal blooms to exude the gas to make the clouds. He acknowledged there could be problems of engineering and cost, but China has been moved to small experiments in the East China Sea.

With any luck, this July, Lovelock will reach his 100th birthday in his home beside the sea in Dorset, having given much of his life to an independent, even “maverick”, view of science.

His concept of the planet as “Gaia”, a living, complex and self-regulating organism, has influenced the approach of much mainstream science. But his work of most immediate value to humankind began 50 years ago at Adrigole, on Bantry Bay in west Cork, where he had a holiday home.

It was here that Lovelock began measuring the chemical compounds in the summer atmosphere as part of a wider investigation. Where he might have expected clean Atlantic air he found a man-made haze containing chlorofluorocarbons (CFCs).

The CFCs of aerosol cans and refrigerators were later shown to be destroying the atmosphere’s ozone layer and were finally banned internationally. But it took a long and hard-won voyage by Lovelock, using instruments he made (and patented) himself to establish their presence, in parts per trillion, across the planet.

Lovelock has the face of a favourite uncle. But his quizzical smile for the media accepts the coming climate disaster that he recognised decades ago. Greens inspired by his Gaia hypothesis (to the point, he has regretted, of near-religion) have felt betrayed by his public scepticism of campaigns for alternative energy and “sustainable” use of nature.

He embraced, for a while, the potential of nuclear energy, but its costs and practical limits disillusioned him. Humanity’s last resort, in one late suggestion, offered confinement in huge, air-conditioned cities.

Meanwhile, as he urged in farewell to one interviewer, “Enjoy life while you can!”