Warm and sunny week ahead with a warning over gorse fires 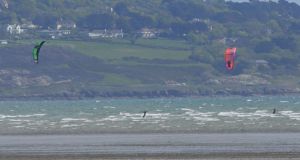 Temperatures will hit 20 degrees this week with most of the country set for a few days of clear skies and sunshine, according to Met Éireann.

The dry spell has prompted the Department of Agriculture to issue a “high fire risk” warning for gorse and forest fires this week.

“It is up to all of us to protect forests. They are an important resource and part of our rural and national economy. To see that investment go up in smoke, literally, is heartbreaking,” he told RTÉ radio’s Morning Ireland.

Most fires don’t start naturally, he said. Unfortunately they are due to careless, reckless or malicious behavior.

On Tuesday maximum temperatures may reach 21 degrees in parts, on what is likely to be the highest temperature of the week.

The country will see long, dry spells of good sunshine, but with southerly winds keeping temperatures slightly cooler along the eastern and southern coasts.

The forecast for Wednesday is for much of the same, with hazy sunshine, and temperatures reaching highs of between 16 and 20 degrees forecast.

Forecasters say winds will be light to moderate during a dry day.

Socks, a Cavalier King Charles, was out enjoying the spell of good weather on Dollymount Beach, Dublin with Conor Phillips from Mayo. Temperatures are tipping 20 degrees this week with most of the country set for a few days of clear skies and sunshine, according to Met Éireann. Full details on irishtimes.com. Photograph: Collins

Wednesday night may see some short showers near the west coast, and thicker cloud overnight. Temperatures into the evening will remain warm, only dropping to between five and nine degrees.

The latter half of the week will see temperatures dip slightly and Thursday will see highs of 15 and 18 degrees.

Thursday will also be cloudier than previous days, particularly across the western half of the country.

While the dry spell will continue for most of the country short rain showers are forecast for parts of Connacht and Ulster.

Friday will bring heavier spells of rain but it will remain mild with between 13 and 17 degrees.

Met Éireann says the rain is likely to clear during Friday evening, making way for sunshine in the north and east of the country.

The initial outlook for Saturday shows sunny spells and some showers, with highest temperatures up to 17 degrees, slightly cooler in parts due to a northerly breeze.

The forecast for Sunday appears to show a mixed day with good sunshine, and periods of rain, with the south of the country to see the best of the weather.

The Department of Agriculture has issued a “high fire risk” warning for gorse and areas of drier grasses, for the week of warm weather.

The status orange warning is in place from Monday to Friday, due to “forecast high temperatures and low relative humidity levels,” the notice said.

The orange status means there is a very high risk because of flammable vegetation. This is as a result of a number of factors including the lack of rain, higher temperatures and high winds.

“A high fire risk exists in all areas where hazardous fuels such as gorse, heather, dried grasses and other dead vegetation exist,” the department warned.

The potential for gorse or forest fires was highest in western parts of the country, which are forecast to have very low humidity levels over the coming days.

Last month a large wildfire scorched hundreds of acres of land in Co Donegal, spreading rapidly after starting near the village of Annagry.

The fire drew a large response from community volunteers helping to tackle the blaze, as well as crews from the Civil Defence, Air Corps, Defence Forces, and Coast Guard.

Last year Coillte dealt with 150 forest fires with over 600 hectares of forest damaged.