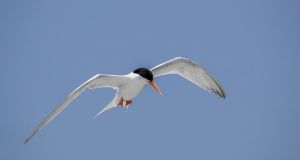 A record number of Roseate Tern seabirds have paired up to raise chicks at a tern colony in Co Wexford during the 2020 breeding season, the National Parks and Wildlife Service (NPWS) has said.

The ground-nesting seabirds, which are also known as sea-swallows due to their appearance, were recorded on islands at Lady’s Island Lake in Co Wexford – a designated special protection area for the Sandwich, Arctic, Common and Roseate species of terns.

All four species, which migrate each spring to nest on the islands, are listed by the European Union as in need of special protection while the Roseate Tern is one of the rarest breeding European seabirds. The Lady’s Island Lake is now the second-largest Roseate Tern colony in Europe outside the Azores islands, according to the NPWS.

There were 273 pairs of Roseate Terns recorded on the island lake this year, up from 195 in 2019, said conservation ranger Tony Murray. The protection project, which has been running for over 30 years, is “heavily reliant on goodwill, support and assistance from the local community”, said Mr Murray, adding that the recent rise in numbers would not had been possible without assistance from landowners and access to storage equipment.

The islands at Lady’s Island Lake are wardened between April and August by NPWS contractors with nest boxes provided for terns on the ground to help them shelter from harsh weather and hide from aerial predators. Two wardens take boats to the islands almost every day during the breeding season to monitor the terns, their nests and any disturbances or predation incidents, said the NPWS. Wardens also read rings on chicks from previous years to improve information on the ecology of birds.

Warden Dave Daly said the weather in 2020 had been “kind at the right time” for all pairs to raise at least one chick, with productivity reaching 1.5 or a chick and a half per pair fledged.

Minister of State for Heritage and Electoral Reform Malcolm Noonan described the record number of tern pairs as a “biodiversity success story” and commended the NPWS for their “incredible efforts to support the tern population” and the people of Wexford for their support.

“As with the National Parks and Wildlife Service’s initiatives to boost Curlew and Partridge numbers and restore White-Tailed Eagles to our skies, this is a story of partnership between wildlife staff and the wider community,” said Mr Noonan.

The Wexford terns have now started migrating south to West and Southern Africa for the winter, the NPWS said.