No more than four Cabinet Ministers present amid heated debate

Heated exchanges continued in the Dáil today as Independent TD Róisín Shortall was expelled in the extended row over the introduction of water charges.

Minister apologises in Dáil if he ‘involuntarily’ said something during water debate. 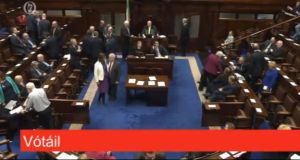 More than one third of TDs have been missing for each vote on the controversial legislation to implement changes to the water charges regime.

During two days of heated debate, or what has variously been described as a “charade” and a “debacle” over the divisive legislation, a maximum of 111 TDs out of 165 cast their ballot.

In some of the votes there were fewer than 100 TDs present. And no more than four Cabinet Ministers were in the chamber for any of the divisions.

The Water Services Bill implements the changes announced by Government for the implementation of charges for the first time to householders on the public water supply system.

A pairing system between Government and opposition was in place for each vote.

In a vote this morning the Government rejected an amendment by Sinn Féin environment spokesman Brian Stanley to include householders, commercial water users and trade union representatives on the “national public forum” Irish Water is to establish. The forum will have between 12 and 60 members.

The amendment was rejected by 78 to 33 votes, the largest turnout for any of the votes over the two days.

Two independents - Terence Flanagan and Peter Mathews - abstained in the vote but remained in the chamber while Independents Lucinda Creighton and Billy Timmins voted with the Government to reject the amendment.

Earlier heated exchanges continued as Independent TD Róisín Shortall was expelled in the extended row over the introduction of water charges.

Ms Shortall was expelled from the chamber after a vote when she refused to sit down and claimed Ceann Comhairle Sean Barrett was shutting the debate down and was during the parliamentary process into a “charade”.

He vehemently rejected Ms Shortall’s allegations, repeatedly asked her to resume her seat and when she refused, called a vote to expel her which was accepted by 72 votes to 33.

The row comes after Thursday’s debate ended in confusion as to whether the charges would result in a net income or deficit to the State.

During the heated debate Minister for the Environment Alan Kelly apologised to Independent TD Mattie McGrath for using what Mr McGrath described as a “nasty expletive” against him. Mr Kelly said he was not aware that he had made any such remark. “But if I did, I withdraw it and apologise. It wasn’t my intention.”

He added: “You asked me if I said something. If I did say something involuntary, I withdraw it and I apologise.”

On Friday Mr Kelly was expected to answer unresolved questions about the cost to the State of the €100 conservation grant to be issued to every household, an argument made earlier by Independent Stephen Donnelly.

Mr Barrett had earlier described the three hours of debate on Thursday night on whether the €100 water conservation grant would cost the State €130 million or €166 million a “debacle” and called a vote on the section dealing with the conservation grant. He also insisted there would be “no filibustering”.

But the Opposition objected and Mr Donnelly claimed the Ceann Comhairle was “subverting the parliamentary process”.

He said the cost would be €130 million to the State for 1.3 million households but opposition TDs said this was €36 million less than their estimate of €166 million for 1.66 million unique households.

Socialist TD Joe Higgins said it was “absolutely right that members would tease out with the Minister the effect in regard to public finances of such a measure”. He said there had been a long discussion on Thursday “which the Minister was unable to resolve”.

But the Ceann Comhairle said that he was not entitled to resolve it at this stage.

The vote he called was about the technicalities of the section of the legislation about the grant. “This is not about how this is being paid for.”

The debate comes on the same day The Irish Times published a report that staff at the Department of Social Protection opposed the handing over of PPS numbers to Irish Water.

Emails show Irish Water sought a “data dump” from the department and failed to engage with them on the question of accessing the data for several weeks.

The article also reveals that the department had serious reservations with regard to the data protection implications around the handing over of PPS numbers.

A waste report published by the Environmental Protection Agency on Friday has also found that Irish Water will need to invest €2 billion in the State’s sewage treatment facilities between now and the 2020’s.

Irish Water have described the report as “stark”, saying it illustrated the need to leverage money to pay for work as “the taxation model” would not raise the sums needed for the repairs.