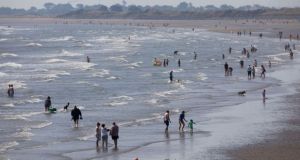 The ban is due to remain in place for four days, according to Fingal County Council. File photograph.

A no-swim notice has been placed on one of north Dublin’s most popular stretches of beach.

The temporary prohibition was put in place at Velvet Strand in Portmarnock due to a storm water overflow at a pumping station, caused by heavy local rain.

It is due to remain in place for four days, according to Fingal County Council.

A water sample will be taken on Thursday with results due on Saturday, at which point the notice will be reviewed.

“Velvet Strand Portmarnock remains open but beach users are asked to respect the ‘Do Not Swim’ notice as it has been put in place to ensure that the health of bathers is not compromised,” the council said in a statement.

The strand is made up of 5km of beach facing Ireland’s Eye island and the Howth peninsula and is a popular summer swimming destination.