Pedestrian numbers in Limerick, Dublin, Cork and Galway fell up to 90% in lockdown 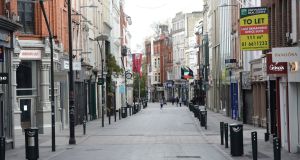 Footfall in the State’s four main cities fell by up to 90 per cent at the height of Covid-19 lockdown, and despite a range of measures designed to reverse the decline, some centres’ recoveries remain tentative, new figures show.

The data, provided this week to The Irish Times by Dublin, Galway, Cork and Limerick city councils, show how devastating the pandemic has been for their main shopping and business districts.

Specialised “counters” deployed at key locations reported pedestrian numbers collapsing by 90 per cent in Limerick, 88 per cent in Galway, 83 per cent in Dublin and 76 per cent in Cork, during the first weeks of movement restrictions in March and April.

Across Dublin pedestrian numbers have “fallen dramatically” according to the city council. Counters in the “core area” between Stephen’s Green and Henry Street reported about 475,000 pedestrians a day in the first week of March, falling to about 80,000 at the start of April.

The main shopping thoroughfares continue to struggle. Henry Street is recovering better than Grafton Street despite measures from the council to boost visitor numbers to the area – including the weekend pedestrianisation of surrounding streets and seven-day permissions for cafes and restaurants for outdoor tables and chairs.

“[Footfall] levels are currently at approximately 50 per cent of pre-Covid levels on Grafton Street and up to 80 per cent on a Sunday on Henry Street,” the council said.

In Cork, footfall on the main Patrick Street fell by 76 per cent in April, compared with the same month last year. It has been recovering since, according to a city council spokeswoman, but by the end of last month was still down 29 per cent on 2019 volumes.

Incentives to attract shoppers back to the city, introduced at the end of July, included the pedestrianisation of 14 streets, two-hour free-parking slots in council-owned car-parks and a €2 million investment in the existing cycling infrastructure.

However, this footfall is 60 per cent below the same period last year, when the city welcomed 580,000 pedestrians. Galway’s worst week comparatively was the last of July – traditionally the start of the Galway Arts Festival and Races – when 80 per cent fewer (160,000) pedestrians were in the city than last year (800,000).

People came in higher numbers from mid-June and by August 28th, 12,656 were counted – 90 per cent of the early March figure.

In Dublin, cyclist counts at the busiest morning hours of 7am to 10am were still at about 30 per cent of their pre-lockdown levels.

“Comparing February to August of this year, to last year, we can see that morning commuter cycling numbers remain significantly reduced,” says the council.

Bus commuter numbers in Dublin “show continuing gradual recovery”, now at 40 per cent of their pre-Covid weekday levels, while “traffic volumes are still flat and have not shown any growth over recent weeks with some locations still well below pre-Covid levels.”