Unfinished business: The case for a nationwide smoky fuel ban 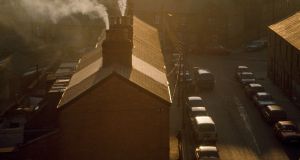 A nationwide smoky coal ban has been favoured by some environment ministers – but coal firms from outside the State have threatened legal action. File photograph: Tom Stoddart/Getty Images

Air pollution is the single largest environmental health hazard in Europe, according to the European Environment Agency. It is estimated to cause 1,600 premature deaths a year in Ireland alone.

While gases such as carbon monoxide and ozone are hazardous at certain concentrations, the main threat is a microscopic airborne particulate matter with a diameter of less than 2.5 micrometres – known as PM2.5. This silent, practically invisible killer can worsen asthma and chronic obstructive pulmonary disease (COPD), and cause heart attacks and strokes.

There is no safe level of exposure to these microscopic particles, according to Prof John Wenger, director of UCC Centre for Research into Atmospheric Chemistry.

Air pollution is made up of a complex chemical mixture of gases and particles that impact strongly on both climate and health, Wenger says. Its insidious side is seen in research indicating exposure to air pollution is likely linked with the occurrence or severity of Covid-19 infection.

In Ireland it arises in a menacing form, he says, from how we heat our homes and what fuel we burn. A nationwide ban on all smoky fuels is now needed, he says, with supports for those in fuel poverty.

He led an EPA-commissioned study (known as Sapphire) which starkly highlights what is at issue. Researchers looked at particulate matter sources in Killarney, Birr and Enniscorthy – residential settings outside areas where the smoky coal ban existed at the time and where there is no natural gas available.The study focused on the contribution of residential solid fuel burning to ambient levels of wintertime PM2.5. Using “chemical fingerprints” of particles generated from combustion of different solid fuels, it revealed burning of peat was the dominant source at each location, followed by wood and then coal.

“So it’s a solid fuel problem; not a coal problem,” Wenger notes.

Average PM2.5 concentrations in Killarney and Enniscorthy were considerably higher than those in Dublin and Cork despite having a fraction of their population.

The programme for government commits to extending the smoky coal ban to new towns “and, over the term of government, move towards a full nationwide ban”. The smoky coal ban has recently been extended to 13 towns including Enniscorthy and Killarney.

Wenger’s blunt message, however, goes further: “We have to stop burning stuff.”

Measures to reduce emissions from all solid fuels – peat, wood and coal – would be more successful in improving air quality for all urban centres including small towns, he adds. Future efforts need to address how homes are heated, “rather than attempting to discourage use of one specific solid fuel”.

A nationwide smoky coal ban has been favoured by some environment ministers – but coal firms from outside the State have threatened legal action, arguing that singling out smoky coal would be anti-competitive, since peat and wet wood produce similar levels of air pollution. Then minister for the environment Richard Bruton acknowledged last year a nationwide ban on smoky coal “carries a serious risk of illegality, unless peat, wet wood and turf are also addressed”.

A ban on smoky fuels is the most acceptable policy despite being most restrictive on trade, it finds. It would be easiest to enforce as only smokeless coal would be allowed enter the country and the current issue of monitoring different types of coal would no longer apply. And it would remove from use all fuel types which produce high levels of PM2.5.

A nationwide ban on bituminous coal alone is likely to increase demand for peat, wood and biomass. Given peatlands ability to act as a natural carbon sink, such a policy “would exacerbate the climate and biodiversity crises”, the report cautions. Because those on lowest income and those most rurally isolated are most dependent on smoky fuels, they are disproportionately exposed to the health impacts of those fuels, it adds.

The ASI report also warns that smoky coal suppliers are likely to mount a challenge against the imposition of a nationwide smoky coal ban under EU competition law, “specifically in relation to the Government imposing unfair trading conditions on one sector of the smoky fuel market”.

In protecting human health and life, only a ban on all smoky fuels can be justified in restricting free movement of goods; whereas prohibition of only one harmful fuel would be an unjustifiable distortion of EU competition.

Ben Harrington, one of the report’s authors, believes a smoky fuel ban has not been pursued because awareness of air pollution in Ireland is poor. “There’s a ‘we all think it’s fine’ attitude,” he says.

He cites another study which shows some smokeless fuels in circulation produce high PM2.5 levels which he says suggests “no fires” is the only good option. Harrington says the introduction of a smoky fuel ban would end a complex and confusing regulatory regime.

A national clean air strategy is to be published later this year, according to the Department of Climate Action and Environment. It will be “a strategic policy framework” seeking to identify and promote additional integrated measures to reduce air pollution and promote cleaner air.

It will adopt a regional approach to air quality enforcement and clamp down on sale of high-sulphur content fuel imported from the UK. It will also invest in the network of monitoring stations and “move towards a full nationwide solid fuel regulation”.

“However, as more research emerges and as we gather increasingly detailed data from our expanded National Ambient Air Monitoring Network, it is clear that a more comprehensive approach is required to reduce air pollution emissions attributed to the use of a range of solid fuels in the residential sector,” it said in a statement.

Fuels such as peat briquettes, turf and wet wood, as well as bituminous coal, contribute to air pollution to varying degrees, the department added. “However, it is not considered likely that a ‘one size’ regulatory approach would be suitable for the regulation of all such fuels, particularly given how other fuels are produced and distributed in different ways.”

The department says supports have been increased for those in energy poverty while an initiative aims to have 500,000 homes retrofitted and 400,000 heat pumps installed in existing buildings over the next decade.

“Improvements to air quality in Ireland are inextricably linked to actions on climate. In particular, assisting those in energy poverty or who are more heavily dependent on solid fuels for heating their homes is an important step in reducing carbon emissions and improving air quality,” the department added.

Wenger believes this transition will take years, entail significant costs as many cannot afford to change to cleaner home heating even with current grants, and ultimately will require an end to use of all wood, even though kiln-dried timber used in a eco-efficient stove is less problematic.

Dr Jurgita Ovadnevaite of NUIG Centre for Climate and Air Pollution Studies (CCAPS) agrees a nationwide ban on smoky fuels is needed, “but not only on fuels currently defined as smoky, all solid fuels, especially the ones used in open fires (like peat, wood and ‘smokeless’ coal)” – currently, peat is not classified as a smoky fuel.

“In Dublin, emissions from solid fuels add to 70 per cent of particulate matter during winter and the situation is even worse in smaller towns that do not benefit from the smoky fuel ban,” she adds.

Top of the clean air strategy’s priority list, she believes, should be home renovations to ensure these polluting fuels are not a necessity, along with banning all solid fuels. “Next would be tackling emissions from transport, especially heavy diesel vehicles, like public busses,” she adds. “Public transport should not lag behind, but set an example for privately-owned cars, while currently, we see opposite – one old diesel bus can match the PM emissions from 50 or more newer private vehicles, and recommendation to use a public transport might, thus, seem hypocritical.”

Her CCAPS colleague Dr Clare Noone puts this against the backdrop of Covid-19. While air quality may have improved during the pandemic bringing considerable benefits for health and climate, notably in transport-related air pollution; “the picture hasn’t been as clear for other dangerous pollutants, PM2.5 for example, whose primary source in Ireland is household fires”.

“The smoky coal ban will see a reduction in this harmful pollutant, and it is imperative that it is extended nationwide if we are to protect lives during this global pandemic. If you live in an area with poor air quality you’re already vulnerable to many health effects, and the associated lung damage from air pollution may worsen those infected with Covid-19.”

The constitutional rights to life and bodily integrity places policymakers under significant obligations to implement effective air quality measures, the Asthma Society of Ireland report argues. Banning smoky fuels would be the most legally-robust option and most conducive to achieving health benefits for those vulnerable to air pollution and have greatest impact in reducing greenhouse gas emissions.

With 25 years of air pollution research behind him, Wenger says it’s about being creative, and “moving away from our love of the open fire”. There are issues about pollutants arising from traffic and agriculture, but tackling PM2.5 first is the way to go “because it’s the largest source of air pollution”.