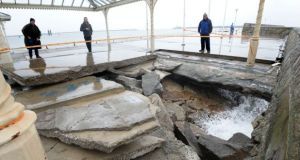 Dun Laoghaire Rathdown County Ccouncil needs to undertake about €10 million in ‘immediate works’ with priority to be given to ‘works which impact on health and safety’, particularly €1.6 million needed to fix the East Pier damaged during storm Emma last year. File photograph: Cyril Byrne/The Irish Times

No Government funding has been provided to Dun Laoghaire-Rathdown County Council to cover almost €40 million in debts from the town’s defunct harbour company, councillors have been told.

Council chief executive Philomena Poole said she was “stunned” the transfer of the harbour to the council “didn’t come with some form of funding”.

Dun Laoghaire Harbour Company, a state commercial company, was dissolved last year and control of the harbour transferred to the council. However, this has left the council with “infrastructural deficit costs” of €38 million to bring the harbour up to standard.

The council needed to undertake about €10 million in “immediate works” with priority to be given to “works which impact on health and safety” particularly €1.6 million needed to fix the East Pier damaged during storm Emma last year, the council’s director of services Therese Langan told councillors at a meeting on Monday.

However, she said the council had not been allocated any State funding to deal with these legacy debts, or to pursue a number of plans for the future development of the harbour.

“No funding was provided in spite of the case being forcefully put as to the financial burden being placed on a single local authority,” Ms Langan said.

Ms Poole said she would have welcomed a commitment to funding “but I didn’t get one”.

The council had no funding for several large scale projects which were part of the 2011 Harbour master plan. Including a €5 million urban beach, a €51 million diaspora centre, and a €30 million cruise berth facility.

The council earlier this year withdrew the application made to An Bord Pleanála for the cruise facility that would have allowed for ships up to 250m in length to dock in the harbour.

Several councillors called for attempts to be made to reinstate a ferry service. Stena Line closed its ferry service in Dun Laoghaire in 2015 due to high fuel costs and falling demand.

Ms Langan said she had made several approaches to Stena and Irish Ferries, and would continue to do so, but all approaches had been unsuccessful.

“It seems unlikely given the past experience that there will be a resumption of such a service.” She added ferry companies were not making investment decisions due to Brexit.

The council is seeking consultants to advise on new uses for the harbour, and to find solutions to declining commercial space and over-concentration of housing in the town centre, under two €100,000 contracts.

The €100,000 harbour contract will involve an assessment of the current marine and tourism uses of the harbour and its economic position, and advise on its future uses and income-generating potential.

Any future plan for the harbour would, Ms Langan said, include the development of a national water sports campus which would provide “proper public access to the water” for water sports such as diving, kayaking, rowing, paddle boarding and angling.

Green councillor Ossian Smyth suggested Minister for Transport and Tourism Shane Ross “who saddled us with all this debt” would consider funding the water sports centre.

People Before Profit councillor Melisa Halpin said the harbour company “ran down the harbour, endlessly wasted its own resources and those of the council on madcap plans”. The new water sports centre must give “access for all”, she said.