How to reduce cycling deaths and accidents in Ireland

Lisa Maher's father Eugene was killed at the age of 62 in a hit-and-run in Dublin in 2015. 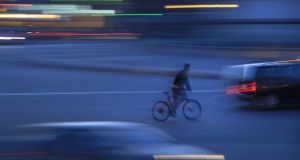 Even with this sharp increase, the national cycle commuting population is under 3 per cent. Yet cyclists account for almost one in 10 people killed on the roads last year.

On January 1st, those with responsibility for road safety announced the “record low” rate of road fatalities in 2017. Just 158 people had lost their lives in crashes, compared with 186 in 2016.

Minister for Transport Shane Ross spoke of how “encouraging” and “heartening” the reduction in deaths was. Road Safety Authority chairwoman Liz O’Donnell said it was a “very welcome development” while Assistant Garda Commissioner Michael Finn thanked the drivers who had made it all possible.

All acknowledged that there was a lot more to do, and that even one death was too many. The State has a target of reducing road deaths to 124 or fewer by 2020.

But no one raised one particularly anomalous figure which stuck out from the good news: cycling deaths were at their highest in a decade. Fifteen cyclists were killed last year.

“We were shocked. We didn’t see it coming,” says Colm Ryder, chair of cycling advocacy group cyclist.ie and secretary of the Dublin Cycling Campaign.

“It was a 50 per cent increase on 2016 and tragically this year the same trend is emerging, with six cyclist deaths and only a third of the year gone.”

At 15 deaths, the numbers may seem small, but they are out of kilter with the numbers cycling. Dublin commuter cycling in particular has increased steadily in popularity since 2006, when cyclists accounted for 2.3 per cent of morning commuters. A decade later, cyclists constituted 6 per cent of those travelling to work.

Even with this sharp increase, the national cycle commuting population is under 3 per cent. Yet cyclists account for almost one in 10 people killed on the roads last year – and more than one in 10 so far this year.

Not all those killed were commuting, but the figures give some indication of the disparity between the numbers cycling and the proportion of cyclists killed.

It is difficult to determine persistent factors in these deaths, says RSA communications manager Brian Farrell.

“Up to now we’ve been relying on what’s called the CT68 form, the initial report from the Garda at the scene, but it doesn’t give you the findings of the full investigation into the crash.”

That will change later this year with the publication of the RSA’s first in-depth report on pedestrian and cyclist fatal crashes. This report will focus on all fatal crashes involving pedestrians and cyclists from 2008 to 2012, and will include results of forensic investigations, toxicology reports, road conditions, weather, and the behaviour of cyclists, pedestrians and motorists.

Which in your opinion is more dangerous?

However, Farrell says the RSA is “not waiting around” for the results of this report, and is promoting a number of measures it believes are crucial to cyclists’ safety, particularly its most recent campaign in relation to safe overtaking distances of one metre on roads with a speed limit up to 50 km/h, and 1.5 metres on all other roads

Legislation for this measure has been promised, but not yet introduced.

Ireland is way behind the rest of Europe on this, 10 years behind’

“We made the decision that we would be in there with that educational message before it comes under legislation,” Farrell says. “It is a deliberate strategy. Our policy it to have no delay in getting the message out there, before the enforcement.

The moral argument hasn’t worked with speeding, he admits. “The 30km zones in city and town centres are vital to protecting out most vulnerable, cyclists and pedestrians. At 30 km/h there is a nine in 10 chance of survival. At 50km/h it’s the toss of a coin. At 60 km/h the odds are reversed – nine out of 10 people hit by a car won’t survive. Yet the majority of drivers are still speeding.”

Dublin City Council engineers last year carried out research on residential roads with a 30 km/h limit. On only two of 40 roads tested did motorists adjust their speed to the new limit.

Farrell says low speeds are essential to saving lives. “It’s not a madcap idea. It has been done across Europe, in Paris, in London. Ireland is way behind the rest of Europe on this, 10 years behind.”

While some driver misbehaviour, such as close passes and speeding, is likely down to carelessness, Farrell concedes there is a hostility towards cyclists not experienced by other road users.

“There is a lack of understanding for and appreciation of cyclists. We are at great pains to try to get across the message that the road is a shared space and everybody is entitled to use it. No user has a greater entitlement than any other.

“Cyclists also have a responsibility to consider their own safety, and the safety of others and not run red lights.”

Cyclists are all too aware of the hostility towards them, Ryder says. “Social media has a lot to answer for. There seems to be a determination out there to pit cyclists against motorists. There’s a cohort of cyclists and pedestrians who break the law, and there’s a cohort of motorists who do the same.” Neither is without blame, he says.

Among those who criticised the poll was Minister of State for the Diaspora Ciarán Cannon who said the tweet was “appallingly ill-conceived” and “deliberately divisive”. Responding to criticism the Garda account tweeted: “We are trying to get people talking about road safety.”

More recently, during heavy snows in February, a video of a cyclist was posted on the official Garda Facebook account with the message: “Please use common sense! Bikes are not permitted on a motorway today or any other day!”

The cyclist was using a cycle lane, obscured by snow, on the Navan Road in Dublin 7. The following day the message was amended with the words “Correction this was on the N3 Navan Road.”

The Garda did not respond to queries from this newspaper in relation to how the video was sourced or why it was posted.

“These incidents haven’t been helpful,” Ryder says. However, his group has had recent meetings with senior officers in the Garda traffic core and “the message has begun to change”, he believes.

A lack of empathy with cyclists could be down to a lack of personal experience. “Many adult cyclists will also be motorists, and all motorists are pedestrians, but there a lot of motorists who will never be on a bike, many probably because they think it’s unsafe.”

Work to improve attitudes and behaviour must be backed by investment in infrastructure, Ryder says. “We’re way behind other European countries, where they segregate cyclists, and kids can go out the door to school feeling safe.

Securing new infrastructure is painfully slow. A cross-country route from Dublin to Galway was proposed several years ago. Some local authorities, notably Westmeath County Council, have made excellent progress, but others have done little.

In Dublin the National Transport Authority last year decided to take control of the Liffey cycle lane project after the city council failed to agree a route despite five years of planning. Consultants appointed to assess the options for the route are expected to finalise their work in the coming weeks, the NTA says.

While these flagship projects are important, Ryder says much could be done to improve the everyday lot of cyclists. “Everybody wants the big projects, but there are small quick wins that would make a big difference to safety, such as improving junctions, fixing poor surfaces, and enforcing the law.”