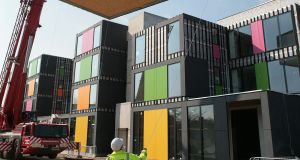 The council is following a model used by London’s Lewisham council which has completed a modular apartment complex providing 24 homes for families living in emergency accommodation. Photograph: Martin Godwin

Fifty years after the construction of the Ballymun flats, Dublin City Council is returning to pre-fabricated apartment blocks to provide a solution to the housing and homeless crises.

At least 100 “modular” apartments are to be erected in Dublin city centre to provide homes for people living in emergency accommodation.

The council has identified two sites in the city for the “volumetric build” project, which will involve “stacking” factory-built housing units to form apartment blocks.

The council is separately assessing three sites in suburban Dublin, at Coolock, Ballyfermot and Finglas for the next phase of standard two storey modular housing.

The council is following a model used by Lewisham Borough Council in South London which earlier this year completed a modular apartment complex which provided 24 homes for families living in emergency accommodation. The four-storey apartment blocks on Lewisham High Street were built in 12 weeks at a cost of about £150,000 per apartment. The council plans to leave them in place for three years, after which they will be “unstacked” and moved to another location. The apartments have a 60-year life span and are designed to be relocated up to five times.

“These technologies aren’t new but haven’t been used in this way before,” Jeff Endean, housing strategy manager at Lewisham Council said. “You have a number of wooden boxes stacked and simply unstacked again. This is a prototype, but I think there’s something in it in terms of addressing the housing crisis.”

The council is housing Lewisham families in B&B accommodation as far away as Margate, 70 miles away on the south east coast and is paying B&B owners £3 million a year for emergency accommodation.

Mr Endean was speaking at a Dublin City Council seminar in July. The council has now decided to go ahead with its own, much larger apartment project at sites yet to be named in the city.

Paul Keogh, chair of the housing committee of the Royal Institute of the Architects of Ireland, said he welcomed measures to address the housing shortage, but urged caution in relation to using modular apartments on city “infill” sites.

“Modular housing is usually reserved for greenfield suburban sites and is generally not appropriate for infill sites in the city where you’re dealing with irregularly shaped sites and you have surrounding buildings to take into account so you need tailored solutions.”