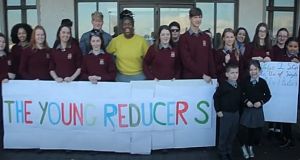 The Young Reducers made the video to get support for a ban on single-use plastics in their school – former pupil and star in The Young Offenders, Demi Oviawe, took part in the production.

In their 21st year, the Young Environmentalist Awards hosted by Eco-Unesco recognise efforts made by young people aged 10 to 18 years old who have worked towards improving the environment – there was a record 500 entries this year.

Winners were announced on Thursday in a virtual ceremony, which included a message from former president and climate activist Mary Robinson. She commended participants for their leadership and ability to make a difference in raising the climate-crisis issue.

With young people being at home this year, Eco-Unesco organised a week-long set of events including workshops and webinars from experts – the theme of Eco Week was “food, fitness, fashion and your future”.

“We wanted to show climate change, waste production and pollution will affect the future generation and it is young people like us that are willing to make a difference. We have been working to create awareness and reduce ‘Young Offenders’ in our school that have been using single-use plastics,” said one member of the reducer team, Aleksandra Proszkowiec.

Students from Sandymount Park Educate Together in Dublin won the junior category for creating a laundry bag that catches microplastics in the washing machine to reduce water pollution. Brothers Evan, Alex and Dylan Nealon from Tralee won the super junior category for the second year in a row for their efforts to reduce pollution by cleaning up Tralee shipping canal and Tralee Bay.

Eco-Unesco national director Elaine Nevin said that despite Covid-19 interruptions, young people continued to work on their projects at home.

“Climate change and biodiversity loss are becoming real threats and young people this year have shown through their YEA action projects how they are tackling some of these issues. We are blown away by the passion and motivation of this year’s entries and their attitude towards making a positive environmental change,” she added.