EU crackdown on plastic pollution needs to focus more on prevention of use, say Coastwatch Ireland

June 7th, 2018: Karin Dubsky from the environmental group Coastwatch has called on MEPs to implement stricter laws governing the production of single-use plastics. 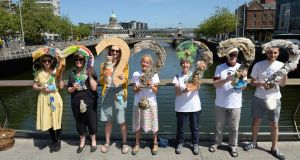 The EU is leading a meaningful crusade against plastic pollution with excellent measures to curb usage but some new legislative proposals “are weak and wacky”, according to Coastwatch Ireland’s Karin Dubsky.

The EU announced a crackdown on single-use plastics last month in an effort to reduce their toll on the marine environment and potential risk to human health but there was little on prevention of use, said the Coastwatch co-ordinator.

There was a focus on particular items with a ban on plastic cotton buds and obscure items such as balloon sticks proposed, yet nothing on hundreds of other items, such as plastic cable ties which were an insidious and rampant form of plastic found in the sea.

There were some measures to reduce plastic waste arising from fishing industry through recycling of fishing nets, for example, but no focus on aquaculture. In addition, action on materials such as polystyrene, which break down and are ingested by marine species, was absent.

Prevention should require replacement of plastic items such as fish boxes with sustainable alternatives, and audits before any plastic item is allowed on to the market, she said.

Ms Dubsky was speaking at a protest on the Rosie Hackett Bridge in Dublin to highlight indiscriminate dumping of plastic in marine environments; the theme of 2018 World Oceans Day this Friday.

The protest supported by other environmental groups was staged on the River Liffey, “because rivers are the main conduit for plastic from land to sea”, she added. “With a deposit and refund scheme [DRS] for plastic drinks containers people would not throw them into rivers and they would not be going out to sea,” she said.

A particular problem was accumulations of litter at the mouths of rivers due to particular wind and current patterns. As a consequence, build-up of plastic waste was all too evident, often on the northern side of estuaries – and needed to be addressed, Ms Dubsky said.

VOICE co-ordinator Mindy O’Brien said Ireland should up its game on single-use plastic as so much of it ended up in oceans. The best way to make an immediate impact was to introduce a DRS for plastic drinks containers, she added.

EU moves to curb plastic were “a great start”, particularly the strengthening “extended producer responsibility schemes” designed to promote integration of environmental costs associated with goods throughout their life cycles into the market price of products.

If adopted, it would also require action on all litter types; not just marine litter, she said. In addition, there was a welcome proposal for recycling fees collected from producers to be used more widely in curbing litter, such as in city bin management.

Sustainable Water Network co-ordinator Sinead O’Brien said it was “urging a more joined-up approach to managing plastic pollution in all our waters – both our seas and our inland waters”.

She added: Our seas are the final recipients of much of the plastic waste and litter that are first dumped or discharged into our rivers, lakes and streams and we want to emphasise the importance of a whole catchment approach to the management of plastic pollution.”