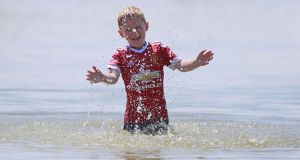 Water pressure reductions have been introduced in Dublin following an increase of millions of litres in water usage despite conservation warnings from Irish Water.

Dubliners are now using more water than can be produced each day, with the utility having to draw on its storage supplies to feed the capital.

The move comes as Ireland recorded its highest June temperature since 1976, with Shannon Airport registering 32 degrees on Thursday.

Parts of the country are expected to hit 32 degrees on Friday before temperatures drop over the weekend to the mid-20s, Met Éireann said.

Demand for water is increasing while levels in rivers and lakes are dropping significantly which means that is there is less water available to treat and then supply to homes and businesses.

Nationally, Irish Water on Thursday identified 100 water supply schemes around the country that were now at risk.

Irish Water said it had to take steps to protect Dublin’s water supplies by reducing pressure at night time across the greater Dublin area.

This is currently being done at a level that will not impact on businesses, it said, but it remains “very concerned” about the possibility of having to impose cuts in the long term.

“Where restrictions are necessary we are endeavouring to do them at times that will have the minimal impact on homes and businesses,” Irish Water’s corporate affairs manager, Kate Gannon said. “Lowering the water pressure in Dublin is designed to save water without causing disruption to customers.”

More severe restrictions could become “unavoidable” if the dry weather persists she said.

“If the drought is prolonged, water restrictions would become unavoidable if demand does not continue to drop. Irish Water are appealing to the public to be continue to be mindful of their water usage.”

Irish Water can produce 610 million litres of water per day to serve the Dublin area.

Transport companies are moving to conserve water during the drought.

Irish Rail said it is cutting back its train cleaning programme from every two days to “at most” once every four days at its maintenance locations at Fairview, Connolly, Heuston and Cork, which are served by Irish Water..

“We will assess the requirement on a case by case basis to see if this can be reduced further,” a spokesman said.

However, normal train washing will continue at its depots at Drogheda, Portlaoise and Limerick which use purpose built wells that do not impact on the public water supply, he said.

Luas operator Transdev said it already operates a water conservation programme which sees it only wash trains every three days, but is reassessing this schedule in light of the current water shortage.

Dublin Bus has committed to only wash their fleet of buses every three days, instead of once a day, in an effort to save water.