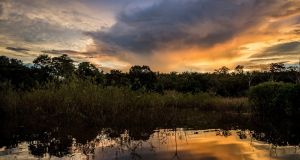 Sunset on the Tapajós River, deep in the Amazon rainforest, in Brazil. Scientists are warning that if human beings continue to mine the world’s wildernesses for resources and convert them into cities and farms at the pace of the previous century, the planet’s few remaining wild places could disappear in decades. Photograph: Meridith Kohut/The New York Times

The last wilderness areas on earth are disappearing at a rapid and shocking rate, according to new findings published in Nature magazine.

Global research conducted by scientists from the University of Queensland in Australia, and the US Wildlife Conservation Society, show that 87 per cent of the world’s oceans have been modified by the direct effects of human activities.

It follows on from an earlier 2016 study by the same authors which showed that 77 per cent of land in the world, excluding Antarctica, is no longer a wilderness but has been modified by human activities.

“A century ago, only 15 per cent of the earth’s surface was used by humans to grow crops and raise livestock,” said James Watson, from the School of Earth and Environmental Sciences at the University of Queensland, one of the report’s authors.

The research shows that 10 per cent of the earth’s wilderness has been lost since the 1990s, due to increased human settlement, agriculture, and mineral exploitation.

The situation in the world’s great seas is more critical. “In the ocean, the only regions that are free of industrial fishing, pollution and shipping are almost completely confined to the polar regions.”

Wilderness areas serve as a brake to the effects of climate change and other human impacts.

And 70 per cent of the world’s remaining wilderness areas lie within just five countries.

The researchers have produced a global map which shows the US, Australia, Russia, Brazil and Canada as the countries that hold all but a small percentage of wilderness areas.

They warn that if human settlement and exploitation continues at the current pace, it will leave few places of wilderness on the plant.

The activities that have impacted the oceans include oil drilling, shipping and fishing.

The authors have argued that wilderness areas “are completely ignored in environmental policy”.