‘We share a love of this place. We need to stand together if we’re going to save it’ 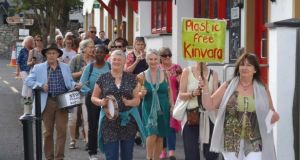 The coastal village of Kinvara in Co Galway has forged an alliance of young people, artists and committed locals to tackle plastic pollution in their locality, including nearby beaches and sea.

In their latest initiative, they have produced a series of billboards created by young people, part of a public awareness campaign called “Our Town, Our World: Standing Together for Land & Sea”.

On the opening day of the annual Cruinniú na mBád Festival at the weekend, three billboards created by teenage artists from Kinvara Youth Council and National College of Art and Design were unveiled, while a custom flag was unfurled at the community centre declaring it a single-use, plastic-free zone.

The billboards are the fruits of an art workshop hosted by Plastic-free Kinvara through a community grant awarded by Galway County Council. Student artists and activists outlined their purpose, while crew members from the whale and dolphin research vessel Celtic Mist endorsed the action, at the ceremony.

Six local students took part in the workshop under the guidance of Gort-based artist and muralist Shona MacGillivray, drawing inspiration from Banksy and other artists who use striking images to evoke urgent calls for social change. Using stencils and vivid colour motifs, the artists painted eye-catching designs that carry unmistakable messages about the grave impacts of single-use plastic in the marine environment.

The billboards are being hung prominently on walls throughout the village. Proprietors granted permission for them to remain on their building exteriors for the next three months. “The cooperation from our community has been tremendous,” said Anna Murphy, co-chair of the plastic-free group. “And this way, tourists and tour bus operators can take in these messages, too.”

Plastic-free Kinvara was set up in March 2018 after a local art project The Witches Knickers highlighted the extent of plastic pollution on local beaches. The group’s first meeting drew 64 people who launched a week-long plastic-free challenge; an effort since replicated in other towns and schools.

Ireland generates more plastic waste per capita than any other EU nation, according to 2016 figures cited by Environment Ireland, she noted. “The natural world is not the cause of this destruction, human consumption is.”

“We all love the natural world, love to go outdoors, take holidays in it, are restored and healed by it at the weekend. Yet we don’t respect it. It’s time to redress the damage we’re doing to developing nations and to the natural world of animals and plants, and not treat their world as our commodity.”

Kinvara was one of a growing number of towns in Ireland where volunteers were helping to change consumer buying habits, she said, and to encourage business and government to act decisively to combat single-use plastic pollution.

Those involved felt a responsibility to examine what’s contributing to plastic pollution, and what they could do to remedy it. Theirs was “a hopeful story, a proactive one, one of concerned citizens reaching across their community with the belief that by small, incremental changes, they can help turn the tide of plastic pollution of our land and seas”.

She added: “It’s one of many such groups springing up in communities across Ireland, notably Kinsale, Roscommon, Westport, and Kilkee. What we do – small achievable projects – is a form of activism that somehow works like a bulwark against the overwhelmingly grim news we receive every day. People feel empowered by doing something, even school age children who might otherwise fall into despair.”

The town, known for its progressive values and vibrant artistic community, boasts a diverse population ranging from sixth generation farmers to arty blow-ins, one community member observed. “We share a common love of this place. And we need to stand together if we’re going to save it.”