Changes to milking can save on electricity and cut carbon emissions, new report finds 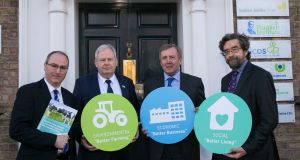 Every litre of milk produced in Ireland is the most carbon efficient in Europe, according to a report on how the Irish dairy sector should respond to climate change.

The report, produced by the Irish Co-operative Organisation Society (ICOS),said this provides a distinct competitive advantage for Irish dairy farmers, which must be underpinned by a strategy to ensure dairying is sustainable and economically successful over coming years.

Positive Steps Towards a Low Carbon Future for the Irish Dairy Sector agreed with the Environmental Protection Agency that “every farm can be its own power plant” and said changes to milking can deliver savings in electricity costs and carbon emissions.

Greenhouse gases arising from agriculture account for 32 per cent of Irish emissions – while they have increased in recent years, it has not been on the same scale of major expansion in the sector which is set to continue up to 2025. Since 2012, there has been a consistent downward trend in the average carbon footprint on dairy farms, it adds.

The report highlights the climate benefits from a grass-based system – 81 per cent of all Irish agricultural land is used for grass production.

“Grass-based dairy and beef production is the backbone of Irish farming and underpins the cost competitiveness and sustainable credentials of Irish agriculture and food production,” said ICOS president Martin Keane, speaking at the launch in Dublin on Wednesday.

There had been great advances in terms of productivity, efficiency and milk quality standards, he said, while emissions from agriculture were 3.5 per cent below 1990 levels.

However, he said a call by the Citizens’ Assembly for a carbon tax on Irish agriculture was “deeply flawed”.

“It would damage the competitiveness of Irish agri-food exports, while benefiting little to the environment,” he said.

Speaking at the launch of the report, Minister for Agriculture Michael Creed said paying substantial EU fines for not meeting climate change targets, instead of investing money in critical public infrastructure, was “not the space that we want to be in”.

The consequences of not acting on global warming were now clear; the analysis was complete, and it had come to the point of “hard choices”, he said.

The report, commissioned by the ICOS, which represents 130 co-ops in Ireland including major Irish dairy co-ops, was developed on foot of the Paris Agreement on climate change. It incorporates views from within the agricultural sector and climate change experts.

Mr Creed paid tribute to ICOS for taking a lead role which, he said, coincided with “the need to move from the lab, to the farm, to the field”.

He said while Irish agri-food CO2 emissions were used as a stick to beat those in the sector, “what is important is that we are best in class globally, with low impact on the environment and low-carbon agriculture”.

Prof John FitzGerald, chairman of the Government’s Climate Change Advisory Council said the report acknowledged the need for agriculture to play its part in reducing Irish emissions, and its approach in initially pursuing the “win-wins” was the correct one.

While the final shape of CAP reforms had yet to emerge, “enhancing attention to the environment” would feature strongly, he said. In addition, the Government had committed to achieving “carbon neutrality” in agriculture. That required taking hard choices; outlining how it is to be done and embracing carbon taxes, which was not a simple option. Dealing with various greenhouse gases arising from farming was an added complication, he said.

The report calls for:

– Measures to improve Irish soil fertility levels; “the health of our soil is a key factor in the production of food in an environmental and sustainable manner”;

– Extensive availability of “sexed semen” (which predetermines the gender of a calf) to maximise dairy heifer calf numbers while reducing carbon footprint;

– Farmers should be incentivised to maintain a habitat management plan on their farms;

The report can be viewed on www.icos.ie