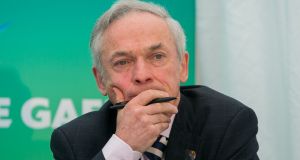 Speaking in the Dáil chamber, Mr Bruton had warned ‘everyone will have to make changes’. He noted sharp differences over who should pay carbon tax. Photograph: Gareth Chaney/Collins

Continued use of fossil fuels, notably gas, will be necessary in Ireland in spite of the declaration of a climate emergency by unanimous approval of the Dáil, according to Minister for Climate Action Richard Bruton.

“Fossil fuels are an essential part of the transition [to decarbonisation]. We are not in a position now to talk about ceasing fossil fuel exploration,” he said on Friday.

Ireland became the second country in the world after the UK to declare such an emergency when a Fianna Fáil amendment to a Dáil motion endorsing a report by the Oireachtas Climate Action Committee report was accepted.

Mr Bruton told the Seán O’Rourke Show on RTÉ Radio the Government’s intention was to move rapidly to end dependence on fossils fuels. The vote meant, he said, there was real momentum and consensus on climate action and on increasing carbon tax.

Speaking in the chamber, Mr Bruton had warned “everyone will have to make changes”. He noted sharp differences over who should pay carbon tax.

Everyone would have to consider how they heat their homes, to move away from fossil fuels and how they managed their travel including “the amount of travelling we do, the mode of transport we use and the types of fuels we use”.

He added: “We must accept that there will be more wind farms and more associated interconnectors and infrastructure being built in or close to people’s backyards. None of those things will come easy.”

Mr Bruton confirmed he will bring forward proposals in a Government plan shortly but ruled out an immediate banning of fossil fuel exploration as Ireland was still 70 per cent dependent on oil and gas for power.

Green Party leader Eamon Ryan said the declaration meant oil and gas exploration and peat extraction could not continue, while the National Development Plan and current transport proposals needed to be radically revised. “It really puts it up to the Government.”

He did not see a downside for the State in ending exploration licences. The odds on a find were very small; it was most likely to be far offshore of the west coast, and the oil or gas was likely to be shipped to Rotterdam rather than piped ashore. Pursuing offshore renewable energy was a better bet, he added.

The Taoiseach should now call an emergency meeting of Cabinet and “push through the key measures that are already before the Dáil and start to preparing for proper investment in nature protection and retrofitting”, Mr Ryan said.

He said it was an unfortunate way to agree the motion “without any of the amendment’s proposers being present”. The Dáil accepted the recommendations of the report with the added Fianna Fáil amendment to declare a climate and biodiversity emergency.

Fianna Fáil’s climate action spokesman Timmy Dooley explained his absence when his amendment was accepted by both Government and Opposition parties without a vote. Spokespeople from the main political parties had been present in the chamber as had he at the beginning of the debate, but he left to attend a meeting, meaning only six TDs were present when the amendment was passed.

“Had there been a vote everyone would have been there as there was wide acceptance of this,” he added.

Declarations on their own were of little use, he said. “Now we need leadership from all the political parties to make the changes necessary.”

Dr Tara Shine of Change by Degrees said the vote was symbolic, but symbolism mattered. “Declaring a climate emergency if nothing else tells the public that this is serious. The Government has never done that before.”

She warned, however, that not telling people what they were going to do in response would scare them. People across the world would not necessarily view a declaration as an end to fossil fuel extraction, she said. That said, if a country was committing to achieving net-zero carbon emissions by 2050, it would have to stop using fossil fuels.

People Before Profit TD Bríd Smith said for the declaration to mean anything the Government had to back her Climate Emergency Measures Bill, including a ban on fossil fuel exploration. “The science says we must leave 80 per cent of proved reserves of oil gas and coal in the ground to stay within the limits of the Paris Treaty.”

Farming was one of the few sectors with a plan, he said. “Teagasc’s climate roadmap is an important scientific pathway to assist the agri-food sector’s low carbon transition. This scientific plan is far better than the unrealistic proposals put forward by the Citizens’ Assembly or threats to the national herd.”