Ireland has potential to adopt ‘nature-based solutions’ such as the use of peatlands to capture carbon dioxide, climate expert says 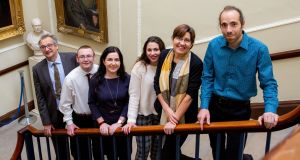 Ireland’s current commitments on climate change fall far short of what is required if global warming is to be limited to a rise of 1.5 degrees, one of the lead authors of a landmark UN report has told an Oireachtas committee.

Prof Valérie Masson-Delmotte, an expert in climate extremes, told the Oireachtas Committee on Climate Action on Wednesday that achieving such a target “is not impossible but requires unprecedented transitions in all aspects of society”.

In trying to limit the rise to 1.5 degrees above pre-industrial levels “each half degree matters”, as risks, including extreme weather events, would increase with a warming world, she said.

Prof Masson-Delmotte is co-chair of of one of the working groups which produced the UN Intergovernmental Panel on Climate Change (IPCC) report, published last month.

The 1.5 degrees scenario “implies rapid changes on an unprecedented scale in energy, infrastructure and industrial systems”, Prof Masson-Delmotte said, and there was a need to remove carbon dioxide on a large scale from the atmosphere during this century.

Methods for doing this included land management, afforestation, changing agriculture practices, generating bioenergy and “carbon capture and storage” (CCS) – though some of these approaches were at the early stages of development. This would also have implications for food security, ecosystems and biodiversity.

A big conversation was needed on “what you want to pay farmers for producing more food, preserving water or sequestering carbon”, she said.

Ireland had the potential to adopt “nature-based solutions” such as the use of peatlands to capture CO2. It was one of the least costly options and brought multiple benefits but more knowledge was needed on the approach.

Dr Pierre-Marie Aubert, co-ordinator of the European Agriculture Initiative said the UN 1.5 degrees report had suggested different pathways to contain warming to that figure, “the land sector” was critical in all options.

Included under that heading was reducing emissions from agriculture and increasing the ability to capture carbon using farmland “meaning that large areas of pasture and non-pasture areas should be devoted to afforestation or bioenergy combined with CCS”.

This had obvious implications for Irish agriculture, he accepted, especially as it was on a path of intensification and specialisation notably in dairying and beef production, as reflected in the Food Harvest 2020 strategy.

In such a scenario, emissions from farming, coinciding with an increase in the national herd, would rise in the period up to 2030. While Irish farmers might be carbon efficient, he did not regard this as a viable option, given the need for the agriculture sector “to reduce its emissions and to provide carbon removal potential for other sectors and to produce biomass for energy and other purposes to contribute to substitution of fossil carbon by renewable carbon”.

People Before Profit TD Bríd Smith said Dr Aubert’s remarks showed Ireland’s current agricultural policy was not sustainable and under its current make-up “will leave us well short of our CO2 obligations for 2020, 2030 and 2050”.

She added: “Ireland’s agricultural policy has to change. We have to reduce herd numbers. Increasing the herd numbers, which seems to be the Government policy, will only contribute to our CO2 emissions.”

Speaking earlier at an event organised by the Irish Climate Change Analysis and Research Units (Icarus) at Maynooth University, in conjunction with ECO-UNESCO , Prof Masson-Delmotte told a group of transition year students the good news was that change was happening but that progress was too slow.

The IPCC report had evaluated climate pledges by countries, and based on current performance, “we are heading for 3 degrees plus”, she noted.

Prof Peter Thorne of Icarus rejected the view that Ireland’s response was “too little, too late”. The country was not alone in making climate promises it could not keep. The response should, however, be apolitical, include good governance and a longer-term approach that “outlives changes in administrations”.

Ireland could become a leader in transitioning to “a post-carbon age” but there was an absence of political will, he said.