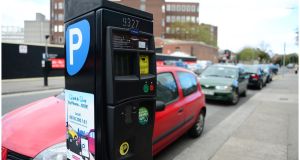 Charges in the high-demand Dublin city centre “yellow zone” will rise from €2.90 to €3.20 an hour, while just outside this area the “red zone” charge will go from €2.40 to €2.70. File photograph: Bryan O’Brien/The Irish Times

Dublin City Council has voted to approve draft bye-laws increasing the rates of on-street parking in the city centre from July.

Late last year, councillors agreed to a 10 per cent increase in charges for city centre on-street parking, the first hike in charges since 2008.

At a council meeting on Monday, draft bye-laws for the changes were approved and will now be put to a public consultation in the coming weeks.

Green Party councillor Ciarán Cuffe said he welcomed the changes, adding the “increase is a lot less than public transport fares have increased” over the last decade, he said.

The increased rates are due to come into effect from July 1st this year.

The council’s traffic department also proposed to extend each of the high demand zones to cover more streets.

The expansion will mean some motorists currently paying €1.60 an hour for parking will see the charge rise to €2.70, a hike of just under 69 per cent, with others facing an increase of one third, from €2.40 to €3.20 an hour.

“One has got to be very, very careful in relation to these charges – already the city centre is suffering as a result of the economy, less and less people are spending in it,” he said.

“If the city can’t actually survive, because people are going out to the shopping centres, then there’s a major issue for us,” Mr Flynn said.

Dublin Lord Mayor Nial Ring said he supported the increase in charges, based on a survey of 18 private car parks in the city centre. Following the raised fees, council parking rates would still be cheaper than at 17 car parks, and the same price as one of them, he said.