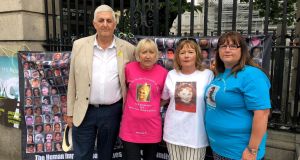 Leo Lieghio, Collette Griffin, Margaret Kavanagh, and Julie Patten, all of whom lost a child in road traffic incidents.

As the Dáil descended into chaos over the Road Traffic Bill on Friday, Noel Clancy looked on in dismay from the public gallery.

It was his amendment allowing for car owners who permit unaccompanied learner drivers to be prosecuted that the House was discussing. It was an issue he had campaigned on for over three years, and it was close to completing a significant legislative hurdle.

Noel had lost his 22-year-old daughter Louise Ann and his wife Geraldine in 2015 in a car crash involving an unaccompanied learner driver.

“It was by accident, not desire, that I found myself involved in road safety issues. I would rather not be involved, but I wanted to ensure nobody else is faced with what we faced. It is not about prosecution or jailing people but about trying to prevent the tragedy that befolded my family,” Mr Clancy told The Irish Times.

He was in the public gallery as the House continued to debate the measures he had pushed for. It was not his first occasion to observe the antics in Dáil Éireann. Mr Clancy and members of the road safety group Parc had spent many evenings in Leinster House in recent weeks watching on as a four-page Bill was debated for over 30 hours.

The debate often took place late at night, meaning families who had travelled from Cork and Donegal had to pay for overnight accommodation.

Some 18 months ago, Minister for Transport Shane Ross announced measures to close a loophole in drink-driving legislation which allows first-time offenders escape disqualification.

A year later he introduced an amendment to address the concerns raised by Mr Clancy and his family.

The proposals were resisted by many in rural Ireland, not least the rural technical group including Mattie McGrath, Michael Collins, and Danny and Michael Healy-Rae. However, as the debate continued, it became clear the group was using the age-old democratic technique of filibustering.

Points of order were regularly called, discussion descended into conversations about waiting lists for driving tests and the Judicial Appointments Bill rather than what was contained within the Bill before them.

It is the right of every TD and Senator to speak for as long as they see fit, and to object to measures proposed, and the guillotine should be avoided at all costs.

However, it was clear to anyone that the legislation would pass, and the attempts to delay the inevitable was causing additional stress and trauma to those families present in the gallery. Already driven by their grief to be present, the antics of a handful of TDs made their pain that bit more unbearable.

For Clancy it was the expressions of sympathy that struck a raw nerve. “Michael Healy-Rae spoke for over an hour on Friday. He said he was sorry for our loss but . . .that word should not have been used.

“We do not want words, we do not want sympathy, what we want is TDs to act in the common good, in the national interest.”

Disgusting, despicable and a farce were the word used to describe Friday’s antics, which would have continued into next week were it not for the intervention of Social Democrats TD Catherine Murphy.

After months of delay and yet another bitter row about filibustering, Ms Murphy asked the Ceann Comhairle to shut down the debate.

In a particularly pointed remark, she said: “It is not enough to go to funerals, offer sympathy and ask, ‘what can I do?’ We are the people in a position to do something about this, including for the people in the gallery.

“Sympathy is no good if, when one is in a position to do something, one does not do it. All of us probably know parents who had a child die on the roads. They say that if they can do anything that will ensure it does not happen again they will do it. That is what these people are campaigning for: to try to ensure that what has happened to them will not happen to other people.”

When the final vote on the Bill was called, it was passed by 75 votes to eight. Independents4Change TDs Clare Daly and Mick Wallace voted with the rural Independents group Michael and Danny Healy-Rae, McGrath and Collins. Independents Michael Lowry and Michael Fitzmaurice also objected to the passage of the Road Traffic (Amendment) Bill.

Danny Healy-Rae shouted that it was a “sad day for rural Ireland”, his brother Michael said this Bill is “pulling the car out from young drivers”.

Independent TD Tommy Broughan accused Mr Healy-Rae of “attempting to talk this Bill down”, and he claimed that if there was a general election “he would try to do a deal with an incoming government that this Bill will never see the light of day”.

Minister for Transport Shane Ross did not get an opportunity in the Dáil to respond to the many comments made during the debate. However, outside the House he said the actions of the rural TDs had cost lives and inflicted hurt on many families.

“I think they have a lot to answer for. What they’ve done is delay this for six or seven months, and I hate to say it but I think that that’s cost a lost of lives, and it may be responsible for a lot of injuries as well.

“I can’t point to specific lives it’s cost, but the fact that this legislation has been delayed must be very, very dangerous.”

The Bill now goes to the Seanad, where similar days can be expected.