Continent lost trillions of tonnes of ice between 1992 and 2017, latest research says 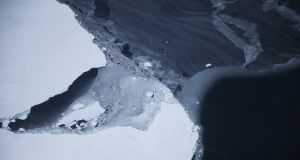 Ice floats near the coast of Antarctica. Photograph: Nasa

The Antarctic ice sheet lost about 3 trillion tonnes of ice between 1992 and 2017, according to satellite analysis, with recent losses causing global sea levels to rise faster today than at any time in the past 25 years.

There has been a threefold increase in ice losses from Antarctica in the period 2012 to 2017, which corresponds to a sea-level rise of about 3mm, the researchers conclude.

In the most complete picture of Antarctic ice sheet change to date, published by the scientific journal Nature on Wednesday, 84 scientists from 44 international organisations combined 24 satellite surveys to produce an assessment.

The project was directed by Prof Andrew Shepherd of the University of Leeds and Dr Erik Ivins of Nasa in the US.

Prof Shepherd said: “We have long suspected changes in Earth’s climate will affect the polar ice sheets. Thanks to the satellites our space agencies have launched, we can now track their ice losses and global sea level contribution with confidence.”

He added: “According to our analysis, there has been a step increase in ice losses from Antarctica during the past decade, and the continent is causing sea levels to rise faster today than at any time in the past 25 years. This has to be a concern for the governments we trust to protect our coastal cities and communities.”

Dr Pippa Whitehouse of Durham University said: “Satellites have given us an amazing, continent-wide picture of how Antarctica is changing. The length of the satellite record now makes it possible for us to identify regions that have been undergoing sustained ice loss for over a decade.

Giant ice sheets, such as those in Antarctica and over Greenland, channel ice to the oceans through a network of glaciers and ice streams. Understanding current “ice-sheet mass balance” – the net balance of ice mass gains and losses – is key to estimating potential future changes in the ice sheet.